By the Pricking of My Thumbs by Agatha Christie (1968) 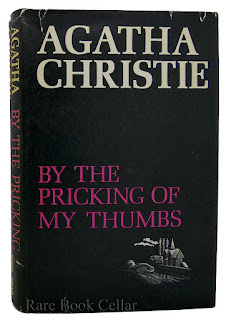 Major characters:
Locale: rural England
Synopsis: Aging Tommy and Tuppence Beresford go to visit his Aunt Ada, at Sunny Ridge nursing home. They meet resident Julia Lancaster, who makes veiled hints about a child who was killed and walled up behind a fireplace. Soon, Aunt Ada passes away, and Julia Lancaster is removed from the home by relatives.
Administrator Miss Packard has the Beresfords go through Aunt Ada's possessions. One item is a painting of a little house by a canal, which was given to Aunt Ada by Julia Lancaster. Tuppence recognizes the scene as one she has seen from the window of a train.
Tuppence wants to return the painting to Julia Lancaster, but is unable to track her down - every inquiry she makes is fruitless. She decides to track down the house in the painting, and finds it occupied by Amos and Alice Perry, who also have stories about children being killed in the vicinity years ago. While trying to track down Mrs. Lancaster, Tuppence is attacked.
Review: The first third of the book seemed quite somber to me, dealing with the inevitability of aging, not only of the Beresfords, but also residents in a nursing home. Agatha was in her late 70's at this writing, and it must have been on her mind as well. I thought about stopping at that point. Then Tuppence got on the trail of tracking down the painting, the narrative recovered and got more exciting. The happenings around the little house get revealed bit by bit, and near the end the story takes a rather suprising and startling turn with Tuppence getting into extreme danger. An excellent story, in which the scary people turn out to be quite pleasant, and the pleasant people turn out quite scary.
Posted by Rick Mills at 3:59 PM