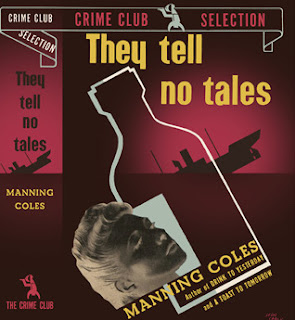 About the author (wikipedia): Manning Coles is the pseudonym of two British writers, Adelaide Frances Oke Manning (1891–1959) and Cyril Henry Coles (1899–1965), who wrote many spy thrillers from the early 40s through the early 60s. The fictional protagonist in 26 of their books was Thomas Elphinstone  Hambledon, who works for the Foreign Office.

Synopsis: Tommy Hambledon and James Bellair are assigned to find out how and why certain outbound ships from a certain naval yard are exploding as soon as they depart. Shipyard worker Donald Macgregor has some information for them. When Macgregor enters a local pub (Cafe d'Albertini) to meet Hambledon and Bellair, he is shot in the back from outside.

The other patrons of the pub become the focus of the investigation, as well as several people associated with the local theatre. An incident at the theatre wounds Bellair, and puts Hambledon on the trail of the unknown bomber.

Review: Manning Coles books are always good for spectacular explosions, and we have three right away, beginning on page five: a "swill lorry" (ewwww), a house holding poor Macgregor's coffin for services, and a ship exiting the shipyard.

Amusing incidents always creep in causing this reader to laugh out loud. Hambledon and Bellair are trying to enter Siddall's apartment which is above a high-ceilinged garage. There is a trap door in the floor of the apartment by which they can sneak in. They attempt to push the trap door open from below by use of a broom handle - unfortunately, unknown to them, the trap door is covered above by 1). a carpet, upon which is 2). a table, upon which is 3). a large vase full of water and cut flowers.

This is the 3rd Hambledon novel, and he is getting his stride now as the series continues.

Note: One occurrence of racist term for persons of Chinese ancestry.

Also please see this review by Bev Hankins on My Reader's Block.