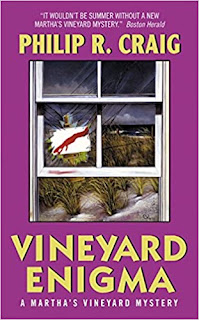 Synopsis: Abraham Mahsimba, of Zimbabwe, comes to Martha's Vineyard (MV) in his search to find two historic carved eagles and return them to the government of Zimbabwe. He hire J. W. Jackson as his local guide and investigator. Together, they make the rounds of the art galleries seeking anyone with any knowledge of them. J.W. is also concerned about the attraction building between his wife, Zee Jackson, and Mahsimba.

The eagles are rumored to be on MV as local Matthew Duarte was the agent for their sale. J.W. and Mahsimba so to see him, but find him dead.

Investigation reveals a tie to David Brownington, who was seeking the eagles at one point. He has not been seen for years, and J.W. wonders if he could be the 'Headless Horseman', a name given to a still-unidentified headless body found years ago. Brownington knew Matthew's father, Daniel Duarte, who died in a car accident.

This is #13 in the series of 20 and now I find it is is best they be read in order, as the characters and incidents seem to build, with references to incidents in previous books.  The series was published 1989-2008 so finding other copies in the series may be a challenge, although they are frequently available on paperbackswap.com.

A good missing-artifact mystery, although the holder of the missing-artifact is a bit obvious. The character of Abraham Mahsimba is well done. I suspected he was not as he seemed, but he turned out sincere for the most part.

J.W. has become a good father but as a husband is a bit too laid-back for me, he doesn't seem to care about his wife getting involved with another man, hey, there's enough love to go around, right? The hinted-at affair never gets off the ground, but still... In his interviews of Rose Abrams (former girlfriend), J.W. comes off as a bully.

The fishing episodes are recounted in too much length and detail, not of interest to non-fishermen, and do not add to the plot.

Surprise: Recipes in the back!