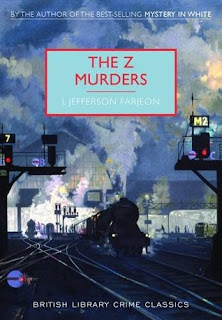 Synopsis: Richard Temperley is travelling on a slow night train and is annoyed by a fellow passenger, John Amble, who snores constantly. They arrive at Euston Station at 5 AM, much too early for anything to be open. They are directed to the local hotel's public smoking room, where they can rest for a few hours. Temperley has a passing encounter with an enchanting woman, Sylvia Wynne. She leaves the smoking room. Temperley becomes concerned that Amble has ceased snoring - checks on him - to find he is dead; with a enamelled letter Z left behind. Detective-Inspector James arrives to determine Amble had been shot from the room's window, but unsure if the shot originated inside or outside.

Temperley finds Sylvia's purse. He does not report it, but decides to take matters into his own hands. He traces her back to her studio apartment. All the time, policeman Dutton is lurking, watching Temperley in order to find Sylvia.

A second death occurs - Martha, a gypsy woman, in a field in Charlton. Temperley believes Sylvia has gone there. A long chase ensues as Sylvia is chased by Temperley, who is in turn chased by Dutton as their path crosses England. Always lurking in the background is The Countryman, apparently a farmer.

This is a mystery and chase thriller rolled into one. An unknown murderer is on the loose, leaving enamelled "Z"s behind as a signature device. As we near the end of the chase, it is explained why the unconnected victims were chosen as far distant locations. The bizarre criminal with the fascination of "Z" reminds me of the early Ellery Queens with the country names in the titles (Greek Coffin, Chinese Orange, etc.)

Many of the particulars of the action are described in roundabout ways, leaving the reader to fill in the details. For example, the accounts of the deaths are vague and I was not really sure if a death had indeed occurred, until it was confirmed in later accounts.

On the last leg of the chase, the killer is revealed to the reader, and the story turns thriller.*

Farjeon has a couple oddities: many people - even major characters - are given descriptive names instead of specific ones (The Countryman, The Man with the Monocle, The Man with No Arms, etc). The other aspect which grates a little is the plethora of Exclamation Points even to unimportant sentences! It gives the writing a Hardy Boys feel! ('It's a telegram!' He exclaimed!)

This is a good page-turner, and my third Farjeon. The first (Mystery in White) was excellent, the second (Seven Dead) was so-so, and this one almost as good as Mystery in White. I will seek out more Farjeons from the British Library Crime Classics series (Amazon), many also available for Kindle.

An aside: You have heard of the old stereotype of the detective standing on the street, leaning against a lamppost, holding a newspaper, and watching someone through a round hole cut in the paper - but this is the first time I have seen it as a serious part of a story (p.70)! Perhaps this is where the trope originated.

*I define a thriller as one where the killer is known to the reader, the mystery becoming will he get caught?