The Feathered Serpent by Edgar Wallace (1927) 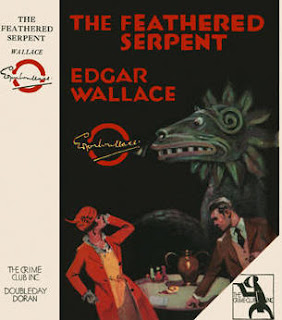 Synopsis:  Reporter Peter Dewin is assigned to cover the story of actress Ella Creed, who has received a warning card, with a drawing of a Feathered Serpent on it. As soon as he contacts Ella, her estranged husband - boxing promoter Joe Farmer - receives one also, followed by stockbroker Leicester Crewe. Everyone is mystified.

Joe Farmer calls Dewin, saying he knows who the Feathered Serpent is, and on his way to reveal the identity is shot dead.

The warnings are thought to come from ex-con William Lane, however, his prison mate Harry Hugg insists Lane is dead; and produces the death certificate showing he was hit by a car and killed.

Peter Dewin is a likable and believable reporter, he would have made a good series character. Love interest Daphne Olroyd is a good character also. Ella Creed is the girl-you-love-to-hate.

The motley collection of ex-cons (Harry Hugg, Harry the Barman, and Harry the Lug are three different people) is amusing although a few less Harry's would have made this clearer.

The victim, Joe Farmer, turns out to have died by an unusual weapon - skirting Knox's Commandment #4: (No hitherto undiscovered poisons may be used, nor any appliance which will need a long scientific explanation at the end.) The Commandments weren't written until 1929 so I will give Wallace a pass on this one.

An interesting dénouement: the last chapter is presented as a news story written by Dewin for his paper, and explains everything; which was quite involved with multiple identities. The murderer was a surprise, I had not seen that coming at all; nor did I see the truth about is-he-dead-or-not William Lane.

This was one of the better Wallaces I have read thus far.