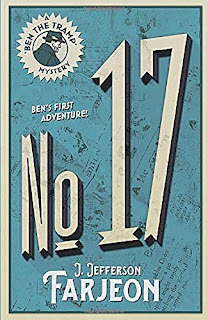 This review is of the 2016 paperback edition of this 1926 novel, which was first produced as a play.
Major characters:
Locale: London

Synopsis: Ben, out of work Merchant seaman, is destitute. Groping his way through the London fog, he finds a house - No. 17 - with the door ajar. Finding no one apparently inside, he takes shelter in an upstairs room for the night. Next, a man with a crooked shoulder enters the house. Ben, frightened, runs out to the sidewalk and into Gilbert Fordyce, who takes interest in the house and goes inside with Ben. In the upstairs room they find a corpse - the man with the crooked shoulder - and a long cupboard. Someone then enters through the skylight, and they grab the intruder to find it is a girl - Rose Ackroyd - who lives next door, and was searching for her father who went out and did not return.

Ben retrieves a gun from the corpse. The next visitors to the house are elder Mr. Brant, his nephew Henry, and niece Nora. They pose as house-hunters while Fordyce poses as a sales agent, and tries to get rid of them unsuccessfully. Ben and Fordyce and afraid Rose and the Brants will find the corpse, but when they look again, it is gone.

Review: This is the first of the Ben the Tramp novels, and employs the Farjeon formula: ‘man goes for a walk, finds a corpse and a girl’.

Creepiness abounds in the fog and dark house. The trips up and and down the stairs are excruciatingly drawn-out and slow. Ben’s words are sometimes hard to understand in print as his dialect is rendered phonetically, and sounding them out is needed to reveal them ... 'berlud' folled me a while until I caught on ... blood.

The story's genesis as a play is obvious - all the action takes place in one room or in the street, and as the plot progresses, the characters have many changes of identity in the usual "Now *I* have the gun and I will tie *YOU* up" sort of exchanges. The roles get hopelessly tangled and confused. Don't try to follow too attentively, just ride the roller coaster.

This story was also made into a 1932 film, Number Seventeen, directed by Alfred Hitchcock, which follows the book closely and has had good reviews as well. It is a standard item on Hitchcock collection DVDs.