This is Murder by Erle Stanley Gardner (1935) 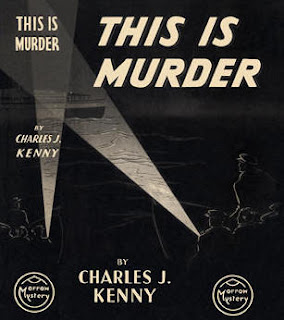 About the author: Charles J. Kenny is a pseudonym of Erle Stanley Gardner. This is one of the few non-Perry Mason novels by Gardner.

Synopsis: Advertising man Sam Moraine lives a Walter Mitty life (click the link if you don't know what that means!). He has a routine 9-5 in an office with a secretary (Natalie Rice), but he envisions himself doing something more exciting. At a poker game with his buddies, he jumps at a chance to accompany his card game friend, D.A. Phil Duncan, to check out a reported kidnapping. Sam's only credential is that he manages a advertising printing concern, so the cover story is that he a document expert to look over the ransom note.
Sam and Phil arrive at the apartment of Doris Bender. Her half-sister, Ann Hartwell, has been missing for two weeks. Now Doris has received a ransom note demanding $10,000 for Ann's return. Doris thinks that Ann's husband, dentist Richard Hartwell, is behind it. Why didn't Ann's husband get the note, anyway?
Doris and her friend Tom Wickes want to quietly pay the money and get her back. D.A. Phil washes his hands of it, since she won't cooperate with the authorities. The kidnappers see mild-mannered Sam Moraine and pick him as the go-between to deliver the cash, since he has the necessary qualifications - a boat - and they want to do the exchange on the water. Sam is up for it and does the swap. No sooner does he get Ann get to shore when they are arrested for not notifying authories on a kidnap case.
Sam gets out of that, and begins investigating in all directions at once. The whole kidnapping setup looks fake. He goes to look up Peter Dixon, but finds him dead. Now the authorities are looking at Sam as the #1 suspect. They take him to the morgue to look at a body but surprise - it's not Peter Dixon - it's Ann Hartwell.
Review: This is the most fun Gardner I have read. Our protagonist/detective is neither a lawyer nor a D.A., but a rank amateur whose only experience is reading detective novels. As Sam puts it, "I always like to read mysteries, and now I'm in one!". What he lacks in experience he makes up in enthusiasm. He absconds with a suitcase full of evidence documents and pulls a Perry Mason switcheroo that is perfect, making fools of the stuck-up "real" investigators. He even manages to work a deal where he is allowed to question witnesses at the Grand Jury session - even though he is the one being charged with murder! ESG always manages to squeeze in a courtroom scene, and here the Grand Jury suffices, and is played fast and loose. Great fun!