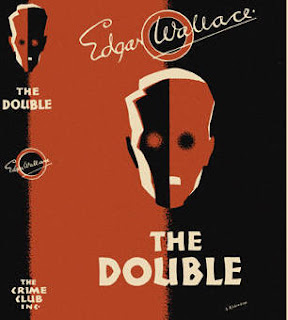 Synopsis: Detective Inspector Dick Staines and his friend Lord "Tommy" Weald are in Brighton on holiday, and Weald describes a beautiful woman he has seen in town - nurse Mary Dane. They run into Tommy's neighbor, Walter Derrick. Staines meets Mary Dane and is enchanted.

Staines has to head back to London. Tommy suggests Staines is welcome to stay in his Lowndes Square, London house. The house is strange - formerly owned by an obscure Religious Order who enjoyed building staircases, chapels, tunnels, and what-not. Staines settles in, but manages to lock himself out on the balcony. The neighbor's balcony is within reach. Staines remembers the adjacent balcony is Walter Derrick's house, and since he is an acquaintance anyway, he may as well try to cross to that balcony, enter Derrick's house, and get out to the street, then return to Tommy's.

Staines jumps over to the adjacent balcony, enters Derrick's house, and is trying to find his way downstairs and out when he encounters a man drugged and tied on the floor, with a woman bending over him - apparently Mary Dane. She and an unseen accomplice escape. The tied man is Derrick's caretaker, Larkin. A fingerprint is found on the glass which had the drugged beer - and is traced back to an unsolved murder.

Derrick reveals this is the third burglary in his home. It is found that his late father left an inheritance which was never found, and it is thought concealed in the home somewhere.

Staines is walking with Mary Dane when she is accosted by Lordy Brown, just off a ship, who claims she is really Mary de Villiers.

Now there are two - maybe three - Mary Danes: the nurse, the burglar, and Mary de Villiers. Or are there?

We are set up quickly with various mysteries: Who is masquerading as Mary Dane, and why? Why is everyone interested in Walter Derrick's architecturally-strange house? Who is Lordy Brown and why is he lurking around?

This is a long book (320 pages) and longer than most Wallaces, which were probably intended for Britons to read while on the Tube going to the Office. The entire middle of the book eats up a lot of pages with a love triangle: both Staines and Tommy have their eyes on Mary Dane, who consents to marry each (simultaneously!)

An amusing episode occurs in a department store when Mary gives Staines the slip (pardon the pun), by insisting she visit the Ladies' Undergarments section where men are simply Not Appropriate Shoppers.

Wallace did manage to fool me - I thought I had the killer pegged from the opening - but was wrong. The denouément did get complex, and I gave up trying to follow the shell game.

The reader may wish to have a copy of Knox's 10 Commandments (1928) handy, this story skirts several: