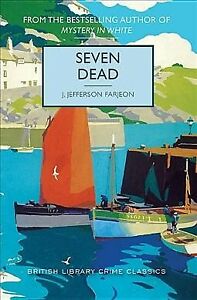 Synopsis: Ted Lyte, amateur thief, chose the wrong house for his first burglary. After entering the isolated house, Ted stumbles upon a locked room containing seven dead bodies. Detective Inspector Kendall takes on the case with the help of passing freelance news correspondent/yachtsman Thomas Hazeldean. They find some odd things: an ancient cricket ball on the mantle, a dead cat in the back yard, and a cryptic note referencing a "suicide club" with a coded reference to where they can find "the particulars". The search for the house's owners, John Fenner and his niece Dora Fenner, leads Hazeldean to Boulogne, France; where he catches up to them. They are unaware of the tragedy which occurred after their departure. The Fenners are staying at a "pension" (boarding house) run by Madame Paula, who husband, Dr. Jones, is promptly killed in an airplane crash. A mysterious "dark-skinned silks seller" (later identified as Gustav) follows the Fenners around.

Review: Creepy happenings and atmosphere abound. The scenes in Boulogne have a Casablanca atmosphere, where shady peddlers lurking around and peeking in windows.

The questioning of Dora by Hazeldean runs way too long, and stretches believability - who would respond to persistent questioning by a stranger who does not reveal why he wants to know?

The questioning of  French maid Maria also runs way too long - and is rendered in "Frenglish" which seems to be a little of both, alternating between confounding and amusing:

There are loads of loose starts and ends. By loose starts, I mean something just appears in the story which has not been mentioned previously. By loose ends, some events are just not explained. A dead man is found with the silks seller, but it never explained who it was. It was assumed to be a certain person, yet that person shows up alive and well later in the story. The writer could have used a "continuity person" to match up starts and ends.

Some aspects stretch credibility: a dead man in England has half a red pencil clutched in his hand, and the other half is found later on a desert island in the South Atlantic.

Overall, a bit cluttered and haphazard; not as good as the other title I have read (Mystery in White).

One little annoyance: This British Library Crime Classic edition, being on metric sized paper, is larger than US paperbacks, and is perfect bound (individual pages glued into the binding) rather than signature bound and my pages kept detaching from the binding glue and coming loose as they are turned. Perhaps just an issue with my copy, but it made one-handed reading pretty much impossible.