The Finishing Stroke by Ellery Queen (1958) 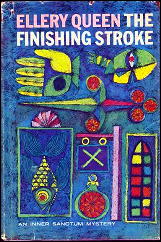 (I have indicated the two John Sebastians, father and son, as Sr. and Jr. here for clarity, but they are not so named in the text - RM)

Synopsis: In 1905, John Sebastian Sr. and his pregnant wife Claire are in a car accident, which brings on early labor. She gives birth to two sons: John, and one unnamed. John, angry at the death of his wife, blames the second child and refuses to acknowledge him, giving him away to the local doctor.

In 1929, Arthur Craig and John Jr. host a Christmas gathering. John Jr. plans to announce four big events at the conclusion of the stay:
The obligatory snowstorm occurs, so the unbroken snow will provide proof that no one enters or leaves the house. The party is surprised by the appearance of Santa Claus, bearing gifts; but he then disappears and cannot be found.

A series of wrapped gifts arrives daily, along with tantalizing threats. Then a stranger is discovered murdered in the library, and the daily gifts/threats continue; until John Jr. - as predicted - is murdered himself.

Ellery ponders the meanings of the written threats but is unable to find the solution, and the murders remain unsolved.

In Book 3 (1957), the police are cleaning out some dead files and Ellery is asked if he would like the dusty evidence box from the case. He looks over the contents and the solution suddenly is evident.

This is another Ellery Queen shell game novel - involving doubles, substitution, etc., and he switches things around even better than Erle Stanley Gardner does with Perry Mason and guns. When twins are introduced at the beginning, you just know there is going to be some of the old switcheroo coming. The murderer leaves a series of obscure clues/threats (in advance of the murder, no less) which fails to prevent its occurrence. (Well, if the clues succeeded, we wouldn't have a murder mystery).

However, the clues and related gifts have no obvious connection to anything and when their significance is finally revealed, it is so obscure that only a person with specific historical knowledge would recognize it. Most readers will not; and will just to accept Queen's word on this point.

The novel also provides a couple of rather blatant product placement promotions: The Roman Hat Mystery (Ellery Queen) and The Poisoned Chocolates Case (Anthony Berkeley) - both actual novels - receive frequent mention without being part of the plot.

Overall, a good page turner. Several red herring story lines had me fooled; I did expect a better explanation of the gifts/threats but we just have to accept them as they are. Writing logical threats are usually not high on a murderer's priority list anyway.