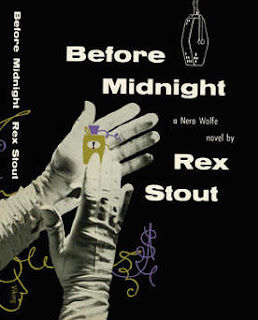 Synopsis: Ad agency LBA is running a contest for their client, Heery Products, makers of cosmetics. Contestants solve questions identifying women in history. The questions are written by Louis Dahlmann. The contest is down to the final five contestants, when Dahlmann is found dead shortly after mentioning to the contestants that he keeps a copy of the answers in his wallet - which is now missing.

LBA (consisting of Vernon Assa, Patrick O'Garro, and Oliver Buff ) and their attorney Rudolph Hanson, hire Wolfe - not to find the murderer, but to find who stole the answers. In a rare case of cooperation, Wolfe and Inspector Cramer find themselves running parallel investigations - Wolfe seeking the thief, Cramer seeking the murderer; but not knowing if they are the same person.

It is always amusing (and uncannily accurate) when Wolfe runs up against corporate in-fighting. The scenes of confusion in the boardroom are excellent.

Of the five contestants, only Philip Younger and Gertrude Frazee are given much attention, and it would have been more interesting to see more of the others.

Wolfe finds himself at an impasse with a looming deadline, and comes up with a ploy to get the murderer/thief to make himself known. A clever ruse which I did not see through until the denouement.