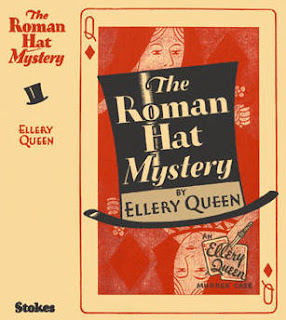 About the author: Ellery Queen is a crime fiction pseudonym created in 1929 by Frederic Dannay and Manfred Bennington Lee, and later used by other authors under Dannay and Lee's supervision. Dannay and Lee's main fictional character, whom they also named Ellery Queen, is a mystery writer in New York City who helps his police inspector father solve baffling murders. (from Wikipedia - full article).

Major characters:
In the audience:

Synopsis: The play "Gunplay" is playing to packed houses at the Roman Theatre on Broadway. Sometime in the second act, Monte Field is found dead in the last row of the audience. Cause of death is found to be an obscure poison. An odd aspect is that his top hat is missing. (Remember, this is 1929, and top hats are de rigeur for men at the theatre). The murderer must have been someone in the theatre. Field is found to have been a blackmailer, with a multitude of people having a motive to do away with him. But where has he stashed his blackmail evidence? And where is his hat? Also see this summary on Wikipedia. 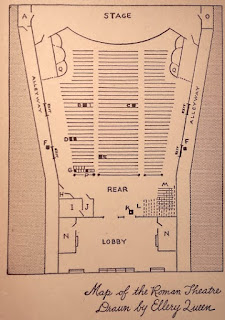 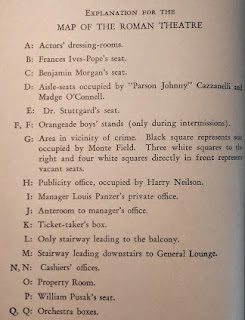 Review: This is the first Ellery Queen novel, and provides the pattern for most of those to follow. It contains a listing of the characters, a map of the crime scene, and an intermission which contains a challenge to the reader - stating all facts have now been presented, and can the reader determine who the killer is?

The character list and the map provide a handy reference while reading. The search for the hat becomes a shell game as more hats pile up. It seems a distraction, yet turns out to be vital to the plot, so pay attention to the hats.

Some cringe-worthy elements are the houseboy Djuna, who seems more a pet than a servant; and an explanation of the motive at the end which reveals the racism of the time. There are some loose ends left dangling at the end, but still a satisfying read.