The Man Without Nerves by E. Phillips Oppenheim (1934)

(Also published in the UK as The Bank Manager) 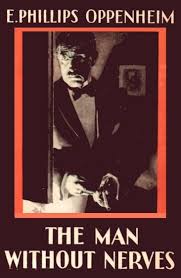 Synopsis: Four men (banker James Huitt, Timothy Sarson, Andrew Cressit, and Roland Martin) from "The Oasis", a village within Sandywayes, share a train compartment every day as they commute to Waterloo. They hear of the suicide death of another Sandywayes resident, Sam Jesson. Jesson had left a note to his wife alluding to financial difficulties.

At the same time a young writer,  Christopher Tyssen, arrives in Sandywayes and begins to poke his nose into everything, including Jesson's death. Townspeople badger banker Huitt (who was Jesson's banker) for details about Jesson's finances, but Huitt remains quiet until the inquest, when he testifies Jesson had depleted his accounts and his opinion was he was a victim of blackmail.

Lord Milhaven hosts a dinner with James Huitt and Sir Julian Bott as guests. Later, as Anthony Sarson and Sybil Cresset are returning from a dance, they encounter a gruff chauffeur waiting with his car in a dark lane near the cottage of the enigmatic Madame de Sayal. Anthony returns to the scene later and is struck in the head. The next morning, Sir Julian's body is found in the spot. Suicide is suspected, but no weapon can be found. Suspicion then points at Anthony Sarson, but as it mounts, the police arrest Christopher Tyssen instead and spirit him away.

This was my first E. Phillips Oppenheim, and it won't be my last. It dances the edge between between a classic detective story (who done it?) and a thriller (you know who done it, but can he be stopped?)

About halfway through, the murderer of Jesson and Bott (previously believed suicides) is revealed in a surprising turn of events when a third murder occurs; although the murderer's motive is not yet clear. The story turns into a thriller of who-can-you-trust when even police are not above suspicion.

One enjoyable aspect of this book is the oh-so-proper village of The Oasis, a small settlement adjacent to Sandywayes; with careful description allowing the reader to see it all in the mind's eye.

One disappointment came from a big loose end: It is found that Huitt is receiving coded radio messages from persons unknown, and much is made of this at the time; yet the purpose of this is never revealed and this story line is abandoned.