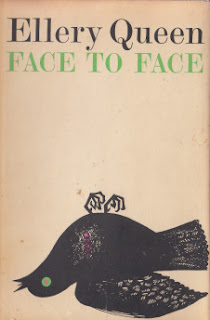 Synopsis: Singer Glory Guild Armando wishes to find her only living relative, Lorette Spanier, a niece; in order to complete her will. She hires private detective Harry Burke who locates her. Glory has married Carlos Armando, a gold-digger who has left behind multiple wives as he depletes their resources.

Lorette becomes roommates with Roberta West, actress. Roberta is approached by Carlos with an offer: If she will murder Glory (and provide him with an alibi), he will marry her next and share the proceeds of the estate.

Glory is found shot, having left a dying message: "FACE". No one understands its meaning.

Evidence points to Lorette (now her heir), and the gun is found in her possession. Then she is provided an alibi by derelicts John Tumelty, a.k.a. "Spotty" and  Curtis Perry Hathway, a.k.a "Mugger". Spotty is then found dead in his boarding house, apparently to keep the alibi from becoming known.

Review: A nice, tight Queen novel with a small cast of characters, and a puzzle to decode. It's a bit convoluted to believe a person would be shot and then have the presence of mind to create a coded dying message, but that is just what makes the novel. Carlos Armando is the character you love to hate, and would love to see the murder pinned upon. The turn of events at the end reveals the murderer, and creates an unpleasant (to the characters) scene at the same time.