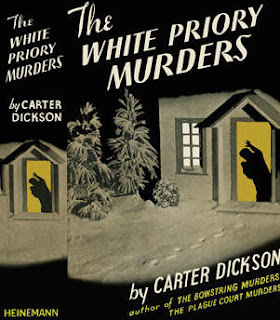 About the author: Carter Dickson is a pseudonym of John Dickson Carr, known for his locked room mysteries.

Synopsis: Actress Marcia Tate has up and walked off her Hollywood set to go to London, to star in a new play put on by brothers Maurice and John Bohun, and financed by Lord Canifest. Her director, Carl Rainger, and publicity manager, Tim Emery, have followed her to convince her to return to Hollywood.

All the principals are invited to White Priory, home of Maurice Bohun. White Priory has a "King Charles Room" which has a "secret staircase" built into the exterior wall which leads down to an exterior door. The estate also features a small cottage, "The Queen's Mirror",  surrounded by a shallow, ornamental lake (now frozen).

Sir Henry Merrivale's nephew from the US, James Bennett, has been invited also. He arrives just after a snowfall, to find John Bohun just exiting The Queen's Mirror, shouting that he has just found Marcia Tate dead inside. There is only one set of footprints in the unbroken snow - John Bohun's from his entry to the cottage. It is then determined the murder occurred after the snowfall, so where are the killer's footprints?

There have been two previous attempts on Tate - first a box of poisoned chocolates had been sent to her, and then someone pushed her down the secret stairs of White Priory.

A nice locked-room puzzle where a woman in found dead in the cottage, yet the only footprints in the snow are those of John Bohun who discovered her! H.M. works on two possible explanations, but neither is just right. Sometimes I find Carr/Dickson a bit hard to follow, when long conversations occur without much clue as to who is speaking; but this one was OK. An enjoyable read, would be a good snowstorm read!