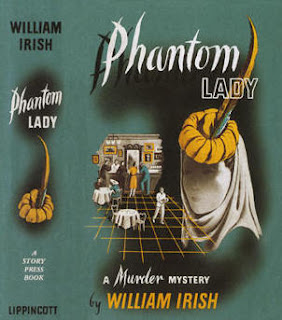 About the author: William Irish is a pseudonym of Cornell Woolrich.

The book is divided into chapters counting down to the execution of Scott Henderson, for the murder of his wife Marcella.

As the story opens, their marriage is already on the rocks. Scott has been flirting with a Miss Carol Richman, who tries to convince him to forget their relationship and reconcile with Marcella. Scott tries by purchasing two tickets for a Broadway show as a surprise, but Marcella refuses to go.

Not wanting to waste the tickets, Scott goes to a local bar hoping to find a companion for the show. He meets the "Phantom Lady" who wears a conspicuous orange hat. He notes she wears a wedding band. They agree to an anonymous date for the evening: no names, no personal information, no expectations beyond dinner and a show.

Scott arrives home after the show to find police waiting. Marcella has been murdered, one of his ties around her neck. Scott's only alibi is the Phantom Lady, and he does not know her name.

Henderson is tried and convicted. Detective Burgess visits him in jail, and concedes he believes Henderson innocent; but there is no evidence to pursue the point. Burgess urges him to find someone to work on proving his alibi. Henderson contacts old friend John Lombard, who arrives to assist.

John Lombard, Carol Richman, and Burgess team up to try to track down persons who can prove Henderson's alibi - but one by one, as they are found, they meet up with mysterious deaths before they can provide the Phantom Lady's identity.

How can you track down a woman you only know by sight - in New York City? It seems hopeless but throw enough effort at it, and it can be done. This is sort of an inverted mystery - the chapter titles counting down to Scott Henderson's execution tells us right off he will be convicted of murder.

The detective Burgess is an interesting character, as he slowly gains sympathy for Henderson, and suggests the plan of action which may exonerate him.

As potential witnesses to sustain his alibi are located, their immediate subsequent deaths suggest a vast conspiracy - and as the book approaches the end, it seems unlikely that the killers(?) can be found in time; yet an unexpected turn of events flips everything upside down, leading to a satisfying conclusion; and the identity of the Phantom Lady finally revealed.