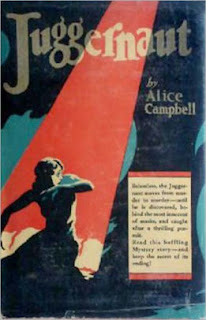 About the author: Alice Campbell (1887-?) was an American-born British writer of detective fiction. Originally she came from Atlanta. She moved to New York City at the age of nineteen and quickly became a socialist and women’s suffragist. Later she moved to Paris. After World War One, the family left France for England, where Campbell continued writing crime fiction until 1950. She published her first work (THE JUGGERNAUT) in 1929. She wrote at least nineteen detective novels during her career. (goodreads)

Synopsis: Nurse Esther Rowe, a Canadian, is on holiday in Cannes. She decides to stay on, and seeks employment with Dr. Gregory Santorius; a cold character who spends most of his time in his research lab. His patients consist of wealthy Americans and English. One is elegant Lady Therese Clifford, who has both a husband (Sir Charles Clifford) and a boyfriend (Captain Arthur Holliday).

Roger Clifford, Sir Charles' son from his previous marriage, returns home from a sales trip to America. Previously, Lady Therese had pursued him (her own stepson!) to be her lover, but he had rebuffed her. Now Roger and Esther are hitting it off, but Roger is beginning to show signs of Typhoid as well.

Nurse Esther gets a bit suspicious and finds a clue which reveals the sinister plot. Once it is known, things happen quickly and the action ramps up to the climax.

This book gets off to a very slow start. For the first half of the book, there is no mystery, just the cold-and-clammy doctor and girl-next-door nurse caring for their patient, Sir Charles; and a budding romance between nurse Esther and Roger Clifford, just back from a trip to America.

Charles is reviewing his will, so that suggests something may develop. The much-younger catty Lady Therese may be waiting for him to pass so she can get her claws on his fortune, and into a much younger man - she is already after two, one of them her own stepson. Much of Lady Therese's dialog and that of the household is rendered in French, so a passing knowledge of conversational French is helpful.

The book is similar to the Nurse Keate novels of Mary Roberts Rinehart, with a couple of exceptions... there is no worship of the handsome doctor who actually is rather creepy, and the nurse's love interest takes root and develops.

This book was made into a movie in 1936 with Boris Karloff (good choice) as Dr. Santorius! Here is the synopsis but it has spoilers!

Available as a free eBook from Project Gutenberg: http://www.gutenberg.org/ebooks/27824