The House with the Blue Door by Hulbert Footner (1942) 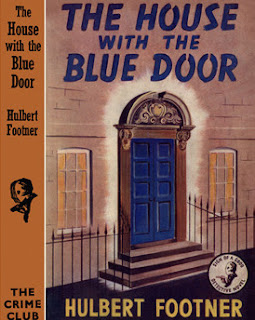 dustjackets.com
About the author: See this Wikipedia article.
Major characters:
Locale: New York City
Synopsis: Wealthy social reformer Sandra Cassells always has to have a Project. Her latest is buying a shabby house in lower Manhattan, and renovating it into a hostel for just-released convicts. She is quite selective about her guests: they have to be on the younger side, and have potential for rehabiliation.
Sandra invites her friend, investigator Amos Lee Mappin, to dinner to meet her first three residents: Sieg and Letty Ammon, and Richard "Blondy" Farren. She names the place "Hope House" and looks to the Ammons to be the hosts at the home (which had its front door repainted blue as part of the spruce-up), along with Soup and Mary Kennedy as cooks/housekeepers. Mappin cautions her that this plan could lead to all sorts of trouble if she is not careful.
It becomes apparent that Blondy has his eyes on Letty, so she arranges for him to get a job in distant Cleveland instead. She recruits a third boarder, "Spanish Jack" D'Acosta, an out-of-work croupier. Letty sneaks out one night to meet someone - could it be Blondy? - and she winds up dead.
Review: Amos Lee Mappin is a great unofficial investigator - he is tight with the authorities, and he has the plodding, detail oriented work ethic of the detective. You can feel the tension build at the home as it becomes populated with the ex-cons. When Letty is killed, Mappin looks for the smallest details to build a version of what happened. Much of the chase is for a mystery man who has been seen but not identified. This is one of the better Footners I have read, and I am keeping my eye out for more.
Posted by Rick Mills at 2:00 PM