Inspector Frost in the City by H. Maynard Smith (1930) 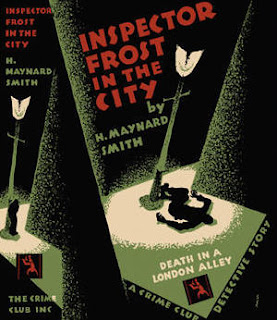 dustjackets.com
About the author: GADetection states: H(erbert) Maynard Smith (1869-1949). Born in London; educated at Wellington College, Oxford, and Cuddesdon Theological College; Canon, Church of England; editor of Church Quarterly Review. His seven crime novels feature Inspector Austin Frost of Scotland Yard, "all of them negligable as detection and tedious as mere adventure" (Barzun / Taylor).
Major characters:
Locale: London
Synopsis: A body is found in a dark alley, Bolter's Court. It appears to be McKinley M. Macmillan, "Triple Mac", and has been stabbed with an antique dagger. A man is found standing over the body, who identifies himself as Edward van Storck, a wealthy American.
Both identifications fall apart. Triple Mac is alive and well in the US. The bystander is found to be Robert Hugh Bolton, who immediately lights it out for Paris.
Inspector Austin Frost and Detective Billy Smith seek to identify the body, but make no immediate progress. The investigation centers on a number of people with connections to Russia and the sale of compromising documents. The dead man is identified, and found to be living in a boarding house run by Ms. Ransom and her daughter Lizzie Ransom.
Review: Despite other reviews I have seen, I found this story fast moving and engaging. The skullduggery of the Russians and the amusing repartée between Frost and Smith and the fantastic characters remind me of the Manning Coles adventures of Tommy Hambledon.
A nice aspect is that the story pauses twice while Inspector Frost reviews the case, naming each person and summarizing their involvement thus far. It makes following the story much easier for the reader.
A drawback is that some chapters contain long passages of alternating conversation, without periodic clues as to who is speaking - so it takes a bit of concentration to follow along.
Posted by Rick Mills at 6:09 PM