The Clue of the Forgotten Murder by Erle Stanley Gardner (1934) 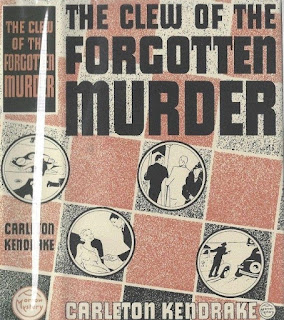 Synopsis: (Story line 1) Charles Morden, reporter for The Blade, is following a story in which Edward Shillingby, private detective, is shot dead on the street. The shooter had stopped Thomas Decker just moments before, but inquiring and finding that he was not Shillingby, passed him up to find Shillingby further up the block, shooting him as Decker witnesses. Morden runs a story on the murder, and not longer after, Morden is hit on the head and killed.

(Story line 2) Meanwhile, police pick up a man, giving the name John Smith, for driving while intoxicated. He has a woman with him - Mary Briggs, a hitchhiker. At the station, they find he seems to be Frank B. Cathay, an investor and bank director. This is scandalous as big-wheel Cathay was out drinking with a woman not his wife. The Blade runs a story on it. Then the real Frank B. Cathay shows up, indignant that someone is impersonating him and that The Blade has libeled him by publishing the story that he was the drunk driver. The Blade admits the error and runs a retraction. Then Cathay is found dead - poisoned. Dan Bleeker, publisher of The Blade, hires criminologist Sidney Griff to find the killer.

Review: This was not my favorite Gardner, but I stuck with it to the end. It is too hard to follow. There are two separate story lines running in parallel, and each one has way too many characters. Any character that pops in for any reason is named, which causes the reader to try to note and remember that name.

Further, many characters use aliases, sometimes three. Dan Bleeker himself gets exasperated in Chapter XVII: "My God, this case is full of women, and every woman has at least one alias.We started with the hitchhiker, who gave the name of Mary Briggs to the police. We now find her in a hotel registered under the name of Stella Mokley, and probably that's not her real name. Then, there's this Stanway woman, who apparently is Blanche Malone; and there's Alice Lorton, who built up a fictitious [identity of] Esther Ordway. I wouldn't doubt if it turns out that Mrs. Cathay really isn't Mrs. Cathay at all." Confused yet?

This story was written (1934) about the same time as the first Perry Mason (1933). Criminologist Sidney Griff is a takeoff on Perry Mason - the dominating brain behind the investigation who pushes the story forward - while publisher Dan Bleeker is a takeoff on P.I. Paul Drake who does all the legwork. This was the only book written under the pseudonym of Carleton Kendrake, so this was never developed into a series.