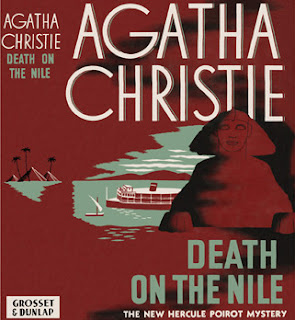 dustjackets.com
Major characters aboard the S. S. Karnak:
And...
Locale: England (briefly), then Egypt
Synopsis: Wealthy Linnet Ridgeway has been renovating her newly-purchased country house, and stringing along stiff old Lord Charles Windlesham about marriage. Windlesham cools on the idea when he realizes she would expect him to move in to her ghastly place, while he prefers his own palatial country house. So no deal.
Linnet's friend, Jacqueline de Bellefort, invites herself over to show off her fiancé, Simon Doyle; and suggests Linnet employ him as Land Manager. Linnet not only does so, but also steals him away from Jacqueline, and marries him.
Linnet and Simon head to Egypt for their honeymoon. Jacqueline pops up there also, following them around and bent on making Linnet miserable. Hercule Poirot is there on vacation. Linnet appeals to him to make Jacqueline just go away. Poirot reluctantly speaks to Jacqueline, without effect. Linette, Simon, Jacqueline, et al. embark on a journey on the S. S. Karnak.
Things come to a head quickly on the boat. Jacqueline confronts Simon, and shoots him in the leg. She is overcome with remorse and retires to her cabin, attended by nurse Miss Bowers. Then Linnet is found shot dead in her own cabin. Jacqueline is the obvious suspect, but has a iron-clad alibi: Nurse Bowers was with her all night. Now Linnet's valuable pearls are missing also.
Review: Linnet is the Ugly American - showy, braggy, entitled, and the Girl You Love to Hate. Right away I was rooting for her to be Victim #1. After a brief introduction to principals in England, we move right away to Egypt. I find some Christies hard to follow due to an overload of characters, and a lot of sleight of hand. This one I could follow fine. A most enjoyable read and the pieces fit together nicely at the end.
My edition has a map of the boat's layout (Ch. XII, p. 149) which appears at an appropriate point.
Aside: Every time I see the name S. S. Karnak I have this vision of Johnny Carson in a turban.
Also see this review by Bev Hankins on My Reader's Block.
Posted by Rick Mills at 11:06 AM