Anybody But Anne by Carolyn Wells (1913) 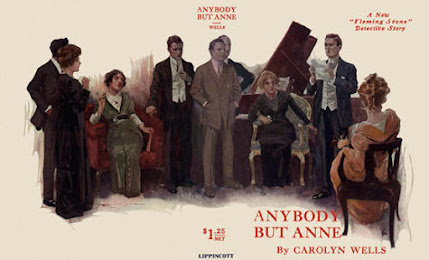 dustjackets.com
About the author: Carolyn Wells (1862-1942) was married to Hadwin Houghton, the heir of the Houghton-Mifflin publishing empire. Like Mary Roberts Rinehart, being in a publishing family created an easy pipeline for getting her works into print. She wrote a total of more than 170 books. See this Wikipedia article.
Major characters:
Locale: The Berkshires (western Massachusetts)
Synopsis: Raymond Sturgis sets out to visit his school-days sweetheart, Anne Mansfield - now Anne Mansfield Van Wyck; married to brusk David Van Wyck. They live in a U-shaped mansion, a main house with two attached wings. One wing is David's study. Raymond finds that he is not the only one enchanted with Anne, she is also desired by Condon "Connie" Archer, and even her own stepson, Morland Van Wyck.
David goes in for sudden impulses, the latest is becoming a Philanthropist. He wants to give his entire fortune to the community to build a library. The family is aghast, it will leave them penniless. Against their wishes, David sets up a meeting to make the donation - in his study, with the library committee of Millar, Brandt, and Garson. The next morning, Van Wyck does not show for breakfast. Then he is found locked in his study, dead from an apparent stab wound. The room is locked tight, and there is no weapon in evidence. The family heirloom, the priceless Van Wyck pearls, are missing. The deed giving the fortune to the library is missing also.
Review: As soon as the book describes the house's unique architecture in detail, we can tell we are being set up for a locked-room mystery. The house has two wings, but they are only attached to the main house at narrow points, only wide enough for connecting doors: 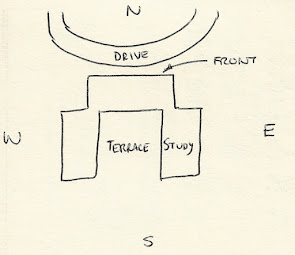 My first thought was some hanky-panky would occur at one of the inside corners, where you could see out one window and into another, but no. The layout does play a part in the crime, and it is well described in advance, giving the reader broad hints to "watch here!"
It is a bit amusing to see various suitors lined up to be the next husband for Anne, even before the body cools off. Five men, by my count, are in love with Anne and waiting to be next.
Mystic Beth Fordyce and Housekeeper Mrs. Carstairs are both rather etherial. They never walk anywhere, but just "glide" through the house.
We have three detectives to deal with: The amateur (Raymond Sturgis), the local (Markham), and the prima donna (Fleming Stone). Stone makes a cameo appearance early in the book - unusual for a Carolyn Wells.
Overall, a fine period locked-room mystery with lots of family drama.
Posted by Rick Mills at 11:03 AM