Murder Up My Sleeve by Erle Stanley Gardner (1937) 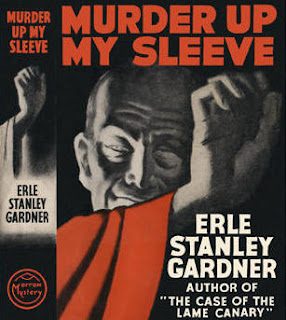 dustjackets.com
This is a continuation of my reviews of Gardner's non-Perry Mason novels. This is the first of two Terry Clane novels (the other is The Case of the Backward Mule).
About the author:
Major characters:
Locale: San Francisco
Synopsis: Attorney Terry Clane is back from spending time in China, has become fluent in Mandarin, and intimate with the Chinese culture of San Francisco. He had been approached by bail broker Jacob Mandra, a collector of obscure weapons. He was interested in having Terry obtain a sleeve gun for him - a spring-loaded dart pipe which can be hidden up one's sleeve. Terry has one of his own, but declined to give it to Mandra, as he was not sure of his intentions.
Terry's girlfriend is Alma Renton. It is believed Mandra is also blackmailing Alma for reasons unknown. While Terry is out with Alma Renton, Mandra is killed - with a sleeve gun. D. A. Parker Dixon calls Terry in and questions him. Neither he nor Alma have an alibi; but Alma has a motive: she was being blackmailed by Mandra.
A woman was seen leaving Mandra's apartment after the murder, carrying a large portrait which concealed her face. The police narrow the suspects to Alma, her sister Cynthia Renton, and a Chinese woman who they cannot identify. Terry is convinced of the innocence of all three, and enters the close-knit and closed-mouth Chinese community to solve the crime.
Review: This novel shows the familiarity and respect Gardner has for the Chinese community, most likely from his history serving as a real-life attorney for indigent Chinese. The descriptions reveal the inside of the community, never seen by outsiders. Attention is given to the Chinese practice of knowing when to speak, and when not to speak. This inside look is fascinating.
We never get to know the victim, he is dead as the story opens. There is the common Gardner technique of juggling the evidence around (in this case, the portrait) to point the way to the murderer when the police can't seem to figure it out on their own.
The story starts with Alma being Terry's love interest, yet he flips back and forth between her and sister Cynthia throughout. George Levering is a puzzle, his periodic role is not clearly defined (other than being a polo player) and he only serves as a link in the movements of evidence.
Posted by Rick Mills at 5:10 PM