A Knife for the Juggler by Manning Coles (1964) 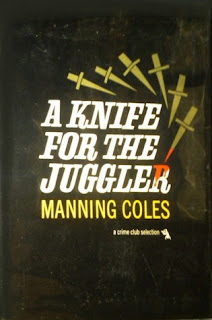 goodreads
About the author: (wikipedia): Manning Coles is the pseudonym of two British writers, Adelaide Frances Oke Manning (1891–1959) and Cyril Henry Coles (1899–1965), who wrote many spy thrillers from the early 40s through the early 60s. The fictional protagonist in 26 of their books was Thomas Elphinstone Hambledon, who works for the Foreign Office.
Major characters:
Locale: France
Synopsis: Someone has been kidnapping communists around Paris, and they have disappeared without a trace. The latest was Pavel Dinnik. The British want him rescued - he was a most reasonable representative of Russia. Tommy Hambledon is sent to Paris to find him.
As soon as Tommy arrives, he witnesses a murder (of Lernhard Werner). While following the killer, he learns that he and another German (Goertz and Ernst Werner) are to attempt something during a juggling show by Don Pedro. Tommy attends, Don Pedro is killed by a thrown knife.
In order to flush out the kidnappers, Tommy calls on his associates Alexander Campbell and William Forgan to speak at a fake communist meeting; hoping a kidnap attempt will be made. Being modelmakers, Campbell and Forgan know nothing about communism, and their inappropriate speeches start a riot.
Tommy finds the kidnapped communists are being held in a wing of a hotel, awaiting transport to a desert island. He assumes the identity of Karl Ardweg and procures a job as a warden. A mysterious grieving widow is a guest also a guest of the hotel and lurks about. Tommy confirms Pavel Dinnik is there, but how to get him out?
Review: An excellent Manning Coles adventure with all the necessary elements: explosions, fires, riots, kidnappings, and general mayhem; all improved by the modelmakers Campbell and Forgan who excel in jumping into trouble and stirring all the pots, never thinking of the consequences. A particularly amusing episode is when the modelmakers are in a cafe, attempting to converse in Spanish, while eavesdropping on a conversation in German; requiring simultaneous double translations.
Posted by Rick Mills at 4:37 PM