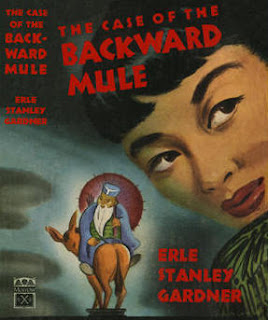 dustjackets.com
This is a continuation of my reviews of Gardner's non-Perry Mason novels. This is the second (and last) of two Terry Clane novels (the first is Murder Up My Sleeve).
Major characters:
* Eastern Art Import and Trading Company
Locale: San Francisco
Synopsis: Terry Clane returns to San Francisco from studying concentration in the Orient. No sooner does he step off the boat, when  the police bring him in for questioning. Edward Harold is on death row for the murder of Horace Farnsworth (boyfriend of Cynthia Renton after Terry broke up with her). Now Farnsworth has escaped, Cynthia is nowhere to be found, and the police think Terry knows their whereabouts. The police show him a wooden figure of a Chinese man riding a mule backwards, and ask if he recognizes it. He does. It belongs to Cynthia Renton, and now it has blood spots on it.
Terry is convinced that Harold is innocent of the charges, and seeks to find him. He is called to a meeting at a warehouse of the Eastern Art Import and Trading Company (E.A.I.T.C.), whose owners are George Gloster, Stacey Nevis, Ricardo Taonon, and the late Horace Farnsworth. Terry enters the warehouse to find someone has been living there. Then he finds the body of George Gloster.
Review: It is too bad there were only two Terry Clane books, they are excellent; especially for their descriptions of the Chinese community. After reading these, one feels as if he could go to Chinatown and feel right at home.
Sou Ha is a great character, well developed and believable as she guides Terry (and the reader) through the mysteries of Chinatown. Cynthia Renton has the leading mysterious where-is-she woman role, her sister Alma is relegated to a brief mention.
Terry Clane's identity is vague - in the first book he is referred to as a lawyer, but his life seems to circle around his trips to China to study with the monks. Bill Hendrum is a puzzle, his role is never explained. Inspector Malloy can be annoying, but that's his job.
A final little mystery - why did nine years elapse beween book #1 (1937) and #2 (1946)?
Posted by Rick Mills at 5:05 PM