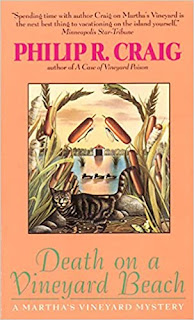 Synopsis: J. W. Jackson and Zee have just married. While in Boston attending the opera, J. W. interrupts a murder attempt on Luciano Marcus. Back on the Vineyard, J. W. is surprised by a dinner invitation from Marcus, not knowing he is also an island resident. J. W. is hired by Marcus to find out who attacked him.

Marcus is wealthy and has fingers in many businesses; looks like a mob boss. His palatial home is on a large piece of property. One part is a cranberry bog, whose ownership is contested by the local Wampanoag tribe. Tribal members want the land back, providing a possible motive.

This is a laid-back book, and the most enjoyable of the series I have read thus far. It does not even become a murder mystery until the end; remaining an attempted murder mystery throughout. I continued to wonder when someone - and who - would turn up dead, didn't happen until the end.

Luciano and Angela Marcus are way too refined, cultured, and pleasant to be mob bosses. In fact, they are not even identified as such; just hinted. They are enjoyable characters, although Luciano has a short fuse when people wander into his property.

The best character is Bill Vanderbeck, a shaman. He pops in and out and no one sees him come and go. He offers his philosophy and comments and does not get involved in tribal drama. He reminds me of Mister Rogers!

The only little drawback to this book is that the attempted-murderer character from the opera scene (which opens the book) is not introduced until the very end, which cheats the reader out of trying to identify him throughout.

By the way ... the cover fooled me. It took a while before I realized the cattails, boathouse, and ducks form a skull!