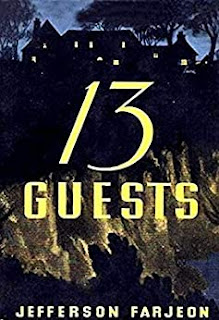 This review is of the Kindle edition.

About the author: J. Jefferson Farjeon worked for Amalgamated Press in London before going freelance. One of Farjeon's best known works was a 1925 play, Number 17, which was made into a number of films, including Number Seventeen (1932) directed by Alfred Hitchcock, and joined the UK Penguin Crime series as a novel in 1939. Farjeon's crime novels were admired by Dorothy L. Sayers, who called him "unsurpassed for creepy skill in mysterious adventures." (from a Wikipedia article).

The thirteen guests:
Locale: Bragley Court, a country house in Flensham, outside London

Synopsis: John Foss, depressed from having a marriage proposal rebuffed, wants to get away for a bit, so takes a train to Flensham on the spur of the moment. When getting off at the station, he catches his foot and turns his ankle. Nadine Leveridge assists him, and takes him along to Bragley Court, a country house of Lord and Lady Aveling, who are hosting a gathering she is attending.
John is placed on a sofa in the "ante-room" (I do hope the ante-room is equipped with anti-macassars) where can be observe the arrival of the twelve guests (he makes 13).
The first indication of an unpleasant gathering is the defacing of a portrait of Anne Aveling, daughter of the hosts, which Leicester Pratt had been painting. Then the Aveling's dog is killed. Next, the body of man - a stranger - is found at the bottom of a cliff.

Review: My first thought was: here we go, the isolated country house and a big guest list. Next we need a snowstorm and the guests knocked off one by one. The invalid mother upstairs is instantly suspicious, as is any alleged invalid in a murder mystery!
One aspect of this high-character count book I like is the methodical introduction of all the guests to John Foss, as we, the reader, observe and become acquainted with them.
However, John Foss was a disappointment. I expected he would be the observer-in-charge and find vital clues, but he is forgotten for most of the book, only returning at the end. Likewise with the invalid Mrs. Morris; whose exit at the end is ambiguous - is she alive or dead? Not sure. Edyth Fermoy-Jones, a mystery writer, is amusing as she shamelessly plugs her books at any opportunity, and snoops around for new plot ideas. Some of the guests are just cardboard and could be edited out without affecting the story, they only serve to enlarge the suspect pool.

You may also enjoy this review by Bev Hankins on My Reader's Block.
Posted by Rick Mills at 10:59 AM