Murder Runs in the Family by Hulbert Footner (1934) 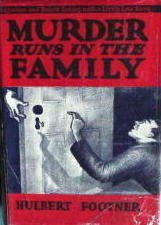 mysteryfile.com
You can read this book online here: http://gutenberg.net.au/ebooks08/0801401.txt
About the author: See this Wikipedia article.
Major characters:
Locale: Connecticut
Synopsis: Lance McCrea has fallen in love at first sight with Freda Rollin, who boards in the same house. Jim's overtures to Freda are rebuffed, as she says she is not free. She appears to have a relationship already with wealthy mill owner Jim Beardmore. Lance and Jim mix it up over Freda.
Lance follows Jim as he picks up a picnic-for-two and goes to his closed-up mansion, Fairfield. Jim enters the library to find Jim dead - but still warm. To his horror, he turns to see a hand reach around the door, grab the key, and shut the door - locking him in with the dead man.
Lance panics as the police approach and runs away, but encounters the murderer in the woods. Police pursue, there is a scuffle, and the murderer kills a policeman, Sgt. Doty. A long chase ensues as Lance evades the police. He is finally caught, but then escapes from the jail. He teams up with company gardener Bob Fassett to infiltrate the Beardmore Linen Mills. The rest of the Beardmore family are running the show with heavy hands; and Lance escapes a murder attempt of being thrown into a vat of acid.
Review: There are a couple of head-scratchers here which linger throughout the book. First, why does Lance run away from the authorities in the first place, as he is innocent? Second, why does he bother to break out of jail - which is, it itself, a crime?
The murder mystery turns into a chase thriller for most of the book. The title hints at the killer, or at least narrows it down. There is a surprise at the end, unrelated to the murder; which gives a satisfying conclusion to the story.
One drawback is the high character count. Everyone who pops into the story is named, thus (in my mind) becoming a suspect, and I had to keep a written list of who is who in case they reappeared later.
Posted by Rick Mills at 7:06 PM