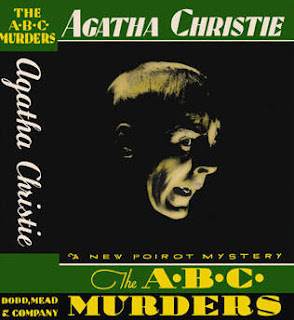 Synopsis: The book is written in two parallel accounts: by our narrator, Captain Hastings; and another account by salesman Alexander Bonaparte Cust.

Authorities scramble to stop the killer, but are unable to get ahead of him as he speeds through the alphabet. The account by Cust describes his visit to each of these communities.

A fourth letter predicts a murder in Dorcaster. A man is killed in a theatre, but his name does not contain a D. However, the patron next to him does have a 'D' name, so it is assumed the wrong person was attacked in the dark.

Poirot's strategy to find the killer is to learn as much as he can about him. He forms a Special Legion consisting of persons connected to the victims, and has them search their minds for clues - and then they find a commonality to the murders.

The format of two parallel accounts is intriguing, and we are led to believe we know who the killer is right away. Don't be too confident. The series of murders in alphabetical order is reminiscent of some of the Ellery Queen mysteries in which serial murders occur. The use of the Special Legion is interesting, and shows that deep questioning and reflection may sometimes reveal the needed clue.