The Case of Jennie Brice by Mary Roberts Rinehart (1913) 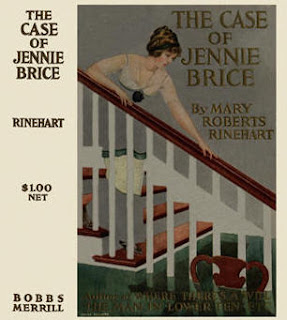 Synopsis: The action takes place at a modest boarding house in the poor side of Pittsburgh, during the flood season. The flood has risen halfway up the first floor (see dust jacket illustration above) in Bess Pitman's boarding house, causing her to relocate her boarders - Philip Ladley and his wife Jennie (an actress with the stage name of Jennie Brice), and Zacaharia Reynolds to the second floor.

The Pitmans don't get along. Jennie has mentioned to her fellow actors that she expects him to kill her. They argue in the boarding house, and the next morning she is missing - and Philip is not too concerned, and vague as to her whereabouts. Bess Pitman immediately suspects murder has been done.

Mr. Holcombe, retired merchant with a heart for animals, is in the neighborhood feeding cats and dogs stranded by the flood. He comes in to feed the Ladley's dog, Peter; and Bess fills him in. Mr. Holcombe is an amateur investigator, and immediately brings in his newspaper reporter friend Ellis Howell to help find out what happened to Jennie.

There are clues to Jennie's whereabouts, but she cannot be located. A body washes up in the flood but cannot be identified - is it her?

Review: The landlady gets suspicious ... one of her boarder couples has a fight, the wife says the husband is going to kill her, and then she disappears and the husband acts nonchalant. The landlady assumes murder and sneaks around to prove it to the skeptical authorities. Could this have been the inspiration for It Had To Be Murder by Cornell Woolrich (1942) - later made into the Hitchcock movie Rear Window - in which a neighbor makes the same assumption and becomes the investigator? *And* both books have a dead dog and baskets on ropes as plot elements. Coincidence?

This is a dark little novel set in a depressing locale and time, but is a fascinating read. The characters take the flood in their stride, it happens every spring. There are none of the famous "Had I But Known" exclamations. The last page contains the shocking solution, as well as a surprising and satisfying twist to the character's relationships.

This is a short novel, but tight. There is no fluff or padding, just constant action in the style of Erle Stanley Gardner.