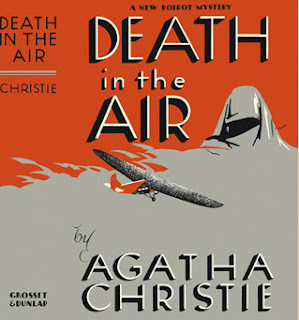 Locale: aboard the airplane Prometheus, en route from France to England

Synopsis:
Hairdresser Jane Grey has won a small amount in a lottery and splurges on a vacation to Le Penit, where she meets dentist Norman Gale and strikes up a friendship. They both wind up on the same flight back to London.

Aboard the rear section of the airplane Prometheus, there are 11 passengers, 2 stewards, and one annoying wasp making the flight from Le Bourget in Paris to Croydon in England. The wasp buzzes around until it is killed by M. Jean Dupont. Madame Giselle seems to be sleeping in her seat, but upon inspection, is really dead. Hercule Poirot finds a poison dart on the floor, matching a puncture in Madame Giselle's neck. Upon landing, a search of the plane finds the matching blowpipe, stuffed down beside M. Poirot's seat. Poirot and his counterpart M. Fournier, of the Sûreté seek to find who the killer is.

Review: If nothing else, this demonstrates how air travel has deteriorated. Windows that open! Ordering a meal from the menu - on a flight of less than one hour! But as to the review, a mystery that has Poirot - and the reader - befuddled until the very end. Clues are set out for the reader, but their significance? A dead wasp and a spoon are vital to the solution. The mystery takes a turn and seeks answers in the past, and in faraway Québec; in order to be solved. Of course, the unexpected ending will tickle your little grey cells!

Also see Review #1 and Review #2 by Bev Hankins on My Reader's Block.
Posted by Rick Mills at 5:40 PM