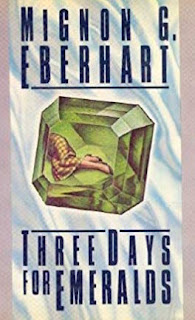 Synopsis: Alicia "Lacy" Wales, legal secretary, receives a letter from old friend Rose Mendez, appealing for help. Lacy asks her boss, Hiram Bascom, for assistance, and he responds in a confusing manner, even kissing her. Lacy goes to see Rose, to find she has deteriorated into a fat, dirty, candy-eating slug. Lacy hands her a drink of whiskey, she downs it, and immediately falls dead. Lacy goes to look for a sheet to cover her up, and in her bedroom she finds that Rose has a framed photo of Richard Blake - her own fianceé - on her nightstand.

The Mendez family appears. There is a convoluted divorce/alimony decree between Carlos and Rose, specifying that her alimony will cease if she remarries. Then a marriage certificate is found between Rose and Richard Blake. Lacy is torn to find her fianceé may have married Rose behind her back.

Review: This is Eberhart's last novel. In 1988 she was 88 or 89, and it is sad that her writing is just not cohesive and magic any more. I considered not finishing it, but stuck with it as a sort of tribute to her career. The action is jerky and illogical, and uses way too many exclamation points, Nancy Drew style. It has the flavor of being dictated. After a rough beginning, it does smooth out somewhat to the end.

The action upon discovering Rose's death is especially hard to follow. Eberhart struggles to get someone to notify the authorities. There is an appearance by several "Spaniards" from the fictional country of Logonda who are stereotyped and wo dimensional at best; their background and relationships are tangled and difficult to understand. Their main activity is standing around, drinking, and looking elegant. One, Rafael, carries his pet with him, which is described at various points as a small dog, a cat, or a ferret; which he claims to have found on an airplane (!). Rafael does turn out to be the most believable of the lot.

Various scenes are just not credible - for example, a family interview by the police breaks into a knock-down drag-out fight and the police just idly wait for it to be over. Lacy drinks a drugged martini, recovers and vows to not drink anything another has prepared - and on the same page accepts and drinks a cup of coffee from Inez - the vow didn't last long. Golden Age clichés remain in vogue - poisoned chocolates and spiked drinks abound.