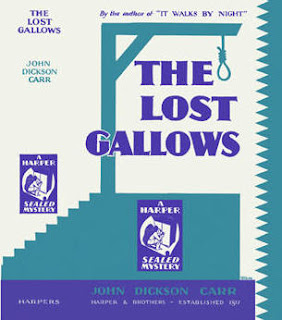 
Synopsis: Old friends M. Henri Bencolin and Sir John Landervorne discover a small model of a gallows while in the lounge at the Hellfire Club, where they live along with our narrator, Jeff Marle. They meet another friend George Dallings, who was lost in the fog one night and was startled by a vision of a shadow of a gallows.

The model turns out to have been sent to Egyptian Nezam el Moulk, also a resident of the club. While outside, they see el Moulk's limosine careening through the city, stopping in front of the club, apparently driven by a dead chauffeur Richard Smail.

El Moulk and his secretary, drunkard Lt. Graffin, are being harassed by someone using the name of Jack Ketch, the name of a former hangman. El Moulk disappears and is believed to be his victim.

Review: This is not the usual Carr locked-room mystery. I struggled through it. I find Carr a bit hard to follow, as his writing tends to follow the random, unrelated thoughts of the narrator and focus is lost. What is he talking about, anyway? It is unclear what relationship Jeff Marle, the narrator, has with the characters other than describing events; and he is not even identified by name until well into the book. The Jack Ketch character drops tidbits about hangings having occurred in Ruination Street, which confounds the investigators as there is no such street. An explanation is provided at the end but it is extremely obscure. Sharon Grey and Colette Laverne are one-dimensional characters perhaps brought in just to have some women in the cast. A rule of fair play is violated in the identity of the mysterious Jack Ketch, and the ending requires a bit of explanation to the reader. Most, but not all, of the loose ends are tied up at the end. Caution: Use of the n-word to describe persons of African-American ancestry.