And Then There Were None by Agatha Christie (1939) 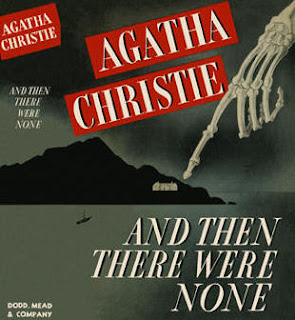 Synopsis: Ten strangers are invited - by trickery - to Indian Island; to discover they are alone on the island. Their "host", U. N. Owen (get it?) does not appear, but leaves a photograph record accusing each of them of a murder to which they avoided prosecution.

Each of their rooms has a framed copy of the "Ten Little Indians" poem (which describes the Indians perishing one by one), and the dining room table has ten china Indian figures as a centerpiece.

One by one the guests are killed in accordance with the poem, each time of the china figures is taken from the table.

The diminishing guests determine there is no one else on the island, so the killer must be one of them.

Review: This classic Christie is a page turner, and the reader is challenged to figure out who is the killer, and how it is done. The use of a written confession, found later, clears up the mystery. This book should be left at home during your island vacation.

Note: There is use of the n-word in the text.
Posted by Rick Mills at 7:05 AM