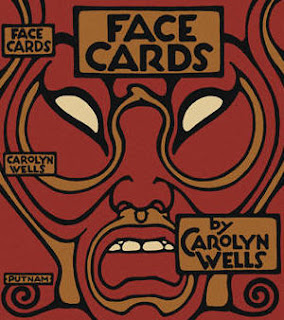 About the author:  Carolyn Wells (1862-1942) was married to Hadwin Houghton, the heir of the Houghton-Mifflin publishing empire. Like Mary Roberts Rinehart, being in a publishing family created an easy pipeline for getting her works into print. She wrote a total of more than 170 books, including 61 Fleming Stone detective stories. See this Wikipedia article. 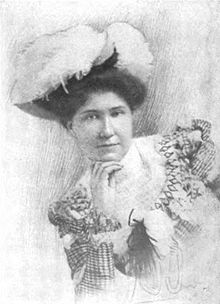 Synopsis: This story is about Stephen Clearman, whose hobby is collecting - and wearing - exotic masks. He has the nickname "King of Clubs" as he has formed/joined many social clubs. His wife, Carlotta Clearman has the nickname "Queen of Diamonds" because of her great love for ... well, you guessed it. Stephen has a daughter, Lulie Clearman, from a previous marriage - and a spinster sister Miss Phoebe Clearman.

The Clearmans have just completed renovations on their home, Clearman Court, with the assistance of architect friend Jack Raynor - a ladykiller who has the nickname "Jack of Hearts". This was done in defiance of a legendary curse by "Duk-Duk", a fierce mask which lives on their mantle. The curse is that anyone who renovates the ancestral home will meet death, which has happened two times previously; but Stephen claims he overcomes the curse with his habit of wearing other masks each day.

The curse, however, wins out. Stephen is found dead - in a locked room - wearing one of his masks. His daughter Lulie disappears at the same time, immediately attracting suspicion. Detective Tony Barron is brought in to investigate, while Jack Raynor concentrates on finding his love, Lulie.

"Face Cards" refers to the Clearman family's tradition of assigning names of playing cards to family members and friends, which has nothing to do with the plot. This is a locked-room mystery, with plenty of creepy supernatural events thrown in, relating to exotic masks.

The primary mystery is the disappearance of Lulie and the search for her. Friend Jack Raynor deduces some clues which lead to her discovery. Lulie's escape from her captors is well done but leaves a big question mark - why, upon attaining freedom, does she reject a policeman's offer of assistance, and instead seek out a lawyer? A bit thin here. The reason for her disappearance only comes out at the end, and the reader realizes plenty of clues have been dropped along the way. The motive for her disappearance comes as a suprise with a few shocking twists at the end.

Detracting from the book is the stereotyped portrayal of Violet, the maid, with her speech rendered in phonetics. This practice, unacceptable today, was the norm in the 1920's.