The Fox Prowls by Valentine Williams (1937) 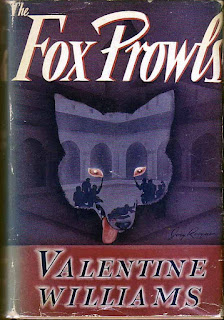 Synopsis: The British Secret Service are keeping their eye on "The Fox", Baron De Bahl. Their Bucharest contact, Ferdinand Vermulven, spots him on the street and alerts them. Major Geoffrey Armitage is assigned to follow him, but turns up drowned in the river.

Automobile executive Stephen Selmar receives word he has inherited a castle in Romania. He and daughter Melissa Selmar look it over and arrange for some renovations with The Fox and his architect henchman Guido Miklas.

Informer Amenescu has information about The Fox for the secret service, and on his way to meet with agent Boulton, is stabbed.

The Selmars take up residence in the castle but become prisoners of The Fox as he turns it into a headquarters for gun-running into the Ukraine. Agent Boulton is on site as a manager and tries to save the Selmars and keep his own identity secret.

Review: This is a thriller (not a murder mystery) - while murders occur, they are described in real time with the killer known. It includes a bit of everything needed for an action thriller: a castle, the heroine imprisoned in its tower, a buried treasure, a border crisis, and even a German with a monocle.

I was taken with the parallels with the James Bond novels: the hero is a British Secret Service agent, and the book begins and ends with him in his office exchanging risqué repartee with the secretary (Moneypenny style); and the somewhat cheesy ending with the heroine.
William's real-life experience in foreign affairs provides insight into the looming border skirmish which builds throughout. An exciting read.