Beauty is a Beast by Kathleen Moore Knight (1959) 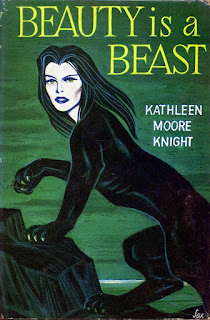 About the author: Surprising little is known about Kathleen Moore Knight (1890-1984), at least online. She is not listed in Wikipedia nor the more popular mystery fiction directories; her booklist is on Fantastic Fiction. My count is 34 mystery novels, all published by the Crime Club; a few under the pseudonym of Alan Amos. See this 1946 interview.
Major characters:
Locale: Westchester County, NY and Penberthy Island, Massachusetts
Synopsis: Althea Lester (Irene Elliott) and Andrea Lester (Sarah Jane Sherman) comprise a successful song/dance team, billed as a sister act, but in reality no relation. Althea is being treated for an obscure, disfiguring disease - acromegaly - by her New York doctor, Harmon Duane Richards. This disease is slowly causing her face to become misshapen, resulting in loss of appearance. Althea seeks to keep her condition sectret, and makes demands on the doctor, and unable to get her way, shoots him; taking her medical file with her. She flees to the family summer home on Penberthy Island with her maid, Hilda McGowen; hoping to keep in isolation to keep her public from learning about her condition.
Caretaker Otis Hobbs visits the house, and following an argument, Althea pushes him off their dock, drowning him. Her pianist Rhyce Broderick arrives unexpectedly, and following an argument, she shoots him. She forces Hilda to help bury him. Next, Andrea arrives, unaware of the dangers.
Selectman/Detective Elisha Macomber becomes suspicious after Hobb's car is found hidden in the woods, nowhere near any water. Scott Maynard, suitor of Althea, arrives to assist Elisha in finding Althea and Andrea.
Review: I have read most of KMK's books, but this is the first one I would classify as a "thriller", using my own personal definition that in a thriller, the murderer is known to the reader all along, the mystery being will he/she get caught?
This is one of the later KMK books and Elisha is right on task, not even derailed by a hospital stay. It is a bit confusing when the two main character names continually flip between their stage names, real names, and nicknames; and it takes a bit of concentration to keep that straight.
Hilda McGowan reminds of Rebecca's Mrs. Danvers as she gradually exerts her control over Althea.
Overall, a great dark-and-stormy night on the island read.
Posted by Rick Mills at 6:13 PM