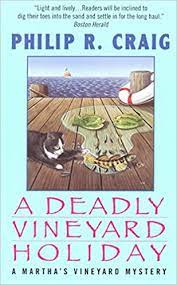 This is Martha's Vineyard mystery #8.
About the author: Philip R. Craig (1933 –2007) was a writer known for his Martha's Vineyard mysteries. He was born in Santa Monica and raised on a cattle ranch near Durango, Colorado. In 1951 he attended Boston University intending to become a minister, and got a degree in 1957. He taught English and Journalism at Endicott College in Beverly, Massachusetts from 1962 to 1965, and at Wheelock College in Boston until 1999, at which point he retired to become a full-time writer. (Wikipedia)
Major characters:
Locale: Martha's Vineyard, Massachusetts
Synopsis: The president, Joe Callahan; first lady, Myra Callahan; and teenage daughter Cricket Callahan are vacationing on Martha's Vineyard. J. W. Jackson encounters Cricket while surf fishing. She is frustrated with the constant surveillance by the Secret Service and wishes to get out by herself. She winds up at J. W.'s house with the Secret Service keeping an eye in the background.
J.W. notices a car stationed at the end of his driveway. It is occupied by Burt Phillips, a writer for a scandal sheet, The National Planet. J. W. flattens his tire to strand him until the authorities can take a look at him. Phillips walks up  the drive to the neighboring wildlife refuge, where he is later found dead from a broken neck.
J.W. learns there is concern about a possible attack on Cricket, and it is suspected that one of the Secret Service agents may be in on the plot; and may have been responsible for Phillips' death. This makes returning her to the compound unwise. Cricket changes her appearance and assumes a false identity of Debby Jackson, a cousin; and enjoys some time on the island as an un-famous teenager.
Review: A good adventure if you can suspend disbelief a bit, and envision the Secret Service A). losing track of one of the presidential family, and B). allowing her to stay with unknown J.W. Jackson instead of in the secure compound. The Secret Service agents come off as thugs, and I am sure they are much more professional in dealing with the public than portrayed. I hope so.
Those things aside, a good page-turning read of the "if you can't trust the government, who can you trust?" situation. It is amusing when J.W. learns a presidential visit to his home is imminent. What to do first? Mow the lawn? Shave? Put on clean clothes? Fix something to eat? I read 3/4 of the book in one sitting, only stopping as I was getting sleepy.
PS. There is no particular holiday - as mentioned in the title - involved. Think of holiday meaning "presidential vacation."
Posted by Rick Mills at 11:00 AM