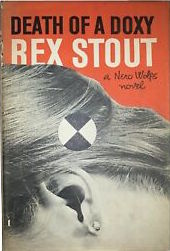 About the author: Rex Stout (1886 – 1975) was an American writer noted for his detective fiction. His best-known characters are the detective Nero Wolfe and his assistant Archie Goodwin, who were featured in 33 novels and 39 novellas between 1934 and 1975. (wikipedia). (bibliography)
Major characters:
Locale: New York City
Synopsis: Nero Wolfe's contract investigator, hotheaded Orrie Cather, is engaged to Jill Hardy. He previously had a fling with Isabel Kerr, who lives large but has no visible means of support. Turns out she is a doxy, a kept woman by sugar daddy business mogul Avery Ballou.
Isabel wants Orrie for herself, and tries to hold him by grabbing his P.I. license and stashing it in her room. Orrie, busy on another job, has Archie Goodwin visit her apartment to retrieve it. Archie finds her dead, hit on the head with a heavy ashtray.
The police find Orrie's license in her room. Orrie winds up held as a material witness, with a murder charge expected. The only way to get Orrie out of trouble is for Wolfe to find the killer. Wolfe enlists the aid of Julie Jaquette, night club singer and Isabel's best friend, to force the killer's hand. It works, the killer takes a few shots at Julie to show it.
Review: This had sat on my shelf for 24 years since the last reading, and I had forgotten how good it is. Bev's review (link below) spells it out in detail, but suffice to say Wolfe gets enamored with a night club singer, and elevates her to a place of honor in his home. Wolfe's method of exposing the killer is clever, and Archie adds a unique tweak to solve multiple problems all at once; including earning a substantial fee. Inspector Cramer only has a couple brief appearances, as Wolfe and Archie do most of the legwork. Great characters, and now I know what a hedgehog omelette is (it has almonds stuck in it which resemble the hedgehog's spines).
See also this review by Bev Hankins on My Reader's Block.
Posted by Rick Mills at 10:46 AM