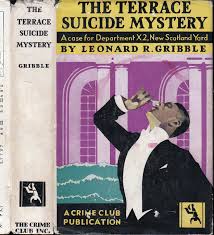 About the author: Leonard Gribble was not only a prolific crime writer, but also a prolific creator of pseudonyms ( Sterry Browning, Leo Grex, Louis Grey, Piers Marlow, Dexter Muir, Bruce Sanders; and Landon Grant ), all of which were definite improvements upon his birth name! See this Wikipedia article.

Synopsis: Baronet Sir Giles Gillespie had brought home a gruesome souvenir, an assembly of 100 sharp iron points, which he installed on the top of his library's terrace wall as a fun decoration. One morning he is found to have apparently fallen from the window onto the spikes and become impaled. Two, yes two, suicide notes are found, one of which was mailed to detective Anthony Slade of Scotland Yard. Giles' son, Sir Royston, arrives on the scene.

Anthony Slade arrives on the scene, and suspects murder. This is strengthened by the discovery of a perfumed (!) blackmail demand letter. He and county Inspector Collins compare notes but cannot agree on what happened. Slade finds ex-con "The Ferret" lurking about, and follows him to a vacant farmhouse where he observes a meeting between The Ferret, henchman Mick, and a mysterious woman in an evening gown and wearing a black velvet mask. The Ferret and Mick depart. Slade and Mystery Woman engage in a long repartee at mutual gunpoint. Royston's finacée, Paula Dane, is kidnapped.

Review: Anthony Slade is a hyper detective who alternates between long sessions of deep thought and jumping into various adventures without regarding the consequences. Slade has this surprising (and annoying) habit of producing evidence which has not been revealed to the reader, a bit disconcerting when these items suddenly pop into the story (a violation of Fair Play Rule #8: – “The detective must not light on any clues which are not instantly produced for the inspection of the reader.”). For example, he is certain Gillespie was strangled to death prior to the impalement, but how does he know?

Some elements are quite outrageous but fun: a perfumed blackmail letter, and a Mystery Woman in full evening gown and black mask in a deserted farmhouse!

Overall, I was hot and cold on this story. Most of it is reminiscent of an old pulp thriller with lots of car chases, people tied up, lights going out, and random shooting. I was expecting Slade to come up with a gun in each hand. Towards the end, it improved, and the denouement revealed an unexpected solution, worthy of Agatha Christie.