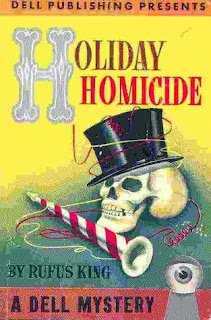 Note: Helen Jettwick's first marriage was to Alfred Jettwick. They had a son, Bruce. Alfred was run over by a taxi and died prior to the story. Helen then married Alfred's brother, Myron. This marriage ended in divorce. Helen is unattached in this story.

Synopsis: Detective Cotton Moon and his sidekick (and our narrator) Bert Stanley are aboard his boat, Coquilla, docked at Wharf House in Manhattan. The boat in the adjacent dock is Myron Jettwick's Trade Wind. Myron has just been found shot. Myron's sister, Miss Emma Jettwick, hires Moon to find the killer, even before the body has cooled.

Circumstantial evidence points to Bruce Jettwick, last to see him alive. Bruce is Myron's nephew - although for a while he was his stepson (see note above). Bruce has a radio show, "The Unknown Troubador" under the name Bruce Lane.

The trouble seems to stem from the acrimonious breakup of Myron and Helen's marriage (her second). Myron had invited all the parties in the divorce on a pleasant everybody-kiss-and-make-up cruise, but the murder occurred before they could sail.

Moon decides to make the cruise happen after all, and all parties set forth for Tortuagas (an island in the Florida keys). This brings things to a head when an additional murder occurs.

Review: Bev Hankins, in this review on My Reader's Block, pointed out the similarities of Cotton Moon / Bert Stanley to Rex Stout's Nero Wolfe/Archie Goodwin. So as I read, I looked for some similarities ... let's see:

Similarities:
Differences:
This is the sixth Rufus King I have read, and I am surprised how the writing style varies in each. This one mirrors Rex Stout, with the wise-cracking sidekick narrator who doesn't take things too seriously. An enjoyable book, although the denouement is quite convoluted. Still, a good read especially for those who enjoy Rex Stout.