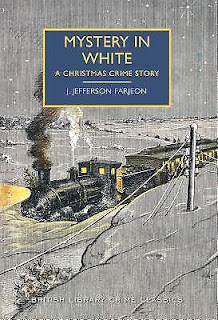 Synopsis: Six passengers share a compartment on the local train, which becomes snowbound on Christmas Eve. They decide to risk walking out. They trudge through the snowstorm, and decide to seek shelter in a nearby house. The door is unlocked, so they go in to find no one home, but the fire going and tea on the stove. While they are warming up, they notice a knife on the floor and decide to leave it as is.

Mr. Hopkins had followed later and became lost in the snow. The group pulls him in, and he tells that he saw a dead man (W. T. Barling) in the next train compartment.

They are soon joined by a local Cockney, Mr. Smith, who is a bit crude and disreputable.

While investigating a mound in the snow nearby (is it a body?) they find William Strange and Nora Strange - owners of the house - their car was stuck in a ditch neaby.

All stay in the house for Christmas - suspicious of each other - and eventually learn the fate of some earlier residents.

Review: This is a good Christmas read. A lot of emphasis is placed on following and interpreting tracks in the snow, and the order of departure from the train and arrival at the house, but these points, like the knife on the floor, are not relevant to the story. In fact, two of the murders occurred long ago and are only revealed now.

One aspect I found most interesting was when Edward Maltby, somewhat of a psychic, discusses how touching artifacts from the past can lead to a connection. I have always enjoyed the ability to touch items from the past - whether it a book with a long-ago gift inscription, or the piece of a Japanese airplane my father brought home as a war souvenir - and imagining how another person had touched these same objects long ago.

Another refreshing aspect - there is no detective in the story. The housebound passengers are left to resolve events all by themselves. There is even a bit of love story worked in as well. I will now have to check for other Farjeon books - I see there is another railway mystery "The Z Murders".