Murder in the Willett Family by Rufus King (1931) 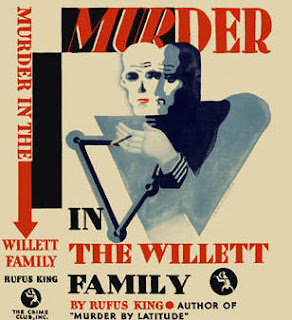 Synopsis: Widow Kate Willett has three sons: Jess (married to Linda), and two younger - Henry and Arthur. She describes Henry and Arthur as “young for their age”, today we would describe them as developmentally delayed. They have a live in caregiver/tutor, Wilbur Strange.

Kate approaches the New York City police after receiving threatening letters. Someone is demanding $20,000 else he will kidnap Arthur and Henry. She took the money to the meeting point, but no one showed up. Lt. Valor is assigned to the case.

The family heads to their summer "camp" in the Adirondacks. Lt. Valcor will accompany them. A fourth letter arrives, with one word: “soon”. That evening, Lt. Valcor and Arthur are in the living room. Arthur becomes unresponsive, he is dead from a bullet wound. The family goes to Bermuda for a respite, but additional murders follow.

Review: The book is prefaced with a sketch map showing the relationship of New York City, the Adirondacks, and Bermuda - which is pretty obvious - a much better choice would have been a sketch map of the Adirondack "camp" where most of the intrigue occurs. I have made one from the text - this seems to fit: 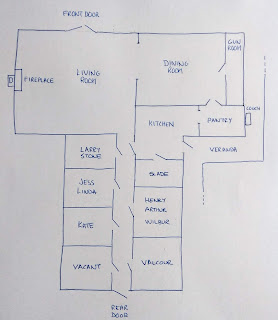 The story is hampered by the constant change of locale, we go from a hotel in NYC to the camp, to Bermuda, to the NYC town house; having to mentally follow the layout of ear.

The story comes to an end rather darkly, and brings up the unsettling question of whether persons with disabilities (Arthur and Henry) are seen as burdens to the family. There are a number of loose ends left unexplained (the blackmailer? the $20,000? and Slade's motivation for his act?), and the reader is left to tie them in. A bit more explanation would have been satisfying.