The Case of the Dowager's Etchings by Rufus King (1944) 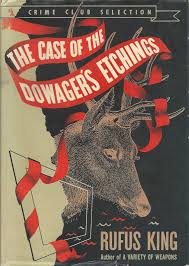 Synopsis: World War II is underway and many people working in war-related factories are in need of housing. Widowed Carrie Giles has a big house, River Rest, with four vacant rooms which she decides to rent for workforce housing. Assuming all war workers are men, she is surprised when a woman, Effie Ashley, applies.

Carrie is a bit paranoid and imagines things about her new boarders. Could Effie Ashley be a spy? Is that a badge attached to Jefferson Parling's wallet? Her paranoia increases when she sees solider grandson Kent Giles, home on leave, sharing an intimate moment with Effie out on the lawn late at night - the day before he arrives by train. The next morning, the dead body of a stranger is found at the spot. Could Kent really be a killer? She begins to cover up what she assumes is his crime.

Carrie had a hobby of producing etchings when she was young, and the equipment is all up in her attic. After seeing one of her etchings on the wall, the boarders all seem too inquisitive about the setup.

Review: Carrie is a fun character - a bit naive perhaps, but there is a war on now. It is interesting seeing her get over her head as boarders fill her house, and sad as she sees her old way of life slowly fading away; and her elegant home slowly deteriorate. The boarders make the story - none of them are red herrings, they all play a part in the plot, and none of them are what they appear. There are clues dropped in here and there about the intrigue which is occurring behind the scenes, and the reader will have an inkling of what is going on. There is a unique denouement, which is presented by one of the "bad guys", not the detective! Of the six Rufus Kings on my shelf, this one is the best.