Clubfoot The Avenger by Valentine Williams (1923) 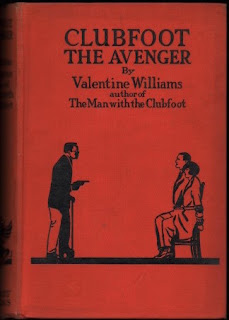 "Being Some Further Adventures of Desmond Okewood of the Secret Service"

This novel consists of three independent spy thriller novelettes strung together in a sequence: The Clue of the Purple Cabriolet, The Affair of the Constantinople Courier, and The Girl at the Hexagon.

Desmond Okewood, retired after the war (which would later be known as World War I, of course), is called back into service for the British. It seems Dr. Adolf Grundt, "Clubfoot", is in England with a list of British Secret Service contacts to do away with, and so far he has plugged three of them.

In The Clue of the Purple Cabriolet, secret service agent Gustaf Törnedahl, is found dead in Vera Slade's car. Desmond and Vera begins to look into it, and is kidnapped and brought before Clubfoot. Before Clubfoot can do away with them, they are rescued by Desmond's brother Francis Okewood. Patricia Maxwell, a friend of Francis' wife, comes to the Okewoods with a strange story. She was bidding on an old Russian ikon painting at auction, and won it against another bidder who ran the price up. At home, she was visited by Dr. Madjaroff (Clubfoot) who offered any price she would name for it. Suspicious, the Okewoods have the ikon examined by an expert, who finds a quantity of radium concealed inside it.

In The Affair of the Constantinople Courier, a King's Messenger is abducted and documents stolen from him. However, the documents are in code and Desmond is grabbed to decode them with the unwilling assistance of femme fatale #2, Xenia, who is being held hostage.

In The Girl at the Hexagon, femme fatale #3, Madeleine McKenzie, is a regular at the Hexagon night club. She gets instructions from her handlers from a flower-seller using flowers as a signal. Desmond masquerades as another to get himself grabbed, and thus taken to Clubfoot. A package of precious jewels is in the balance.

I wonder if Ian Fleming read this author prior to writing his James Bond novels (when it was written, Fleming was 15 years old!). The story line is a predictor of the James Bonds. Here we have a British Secret Service agent, having - ahem - liaisons with a femme fatale spy, chasing an arch criminal, who captures the pair and ties them up. While passing the time before killing them, the master criminal and our hero engage in witty repartée - and we are only on page 35 by this point!

The Valentine William's spy thrillers are set in the period between World War I and II, when you might assume things were quiet. But the action is nonstop and all are good reads.