A Murder is Announced by Agatha Christie (1950) 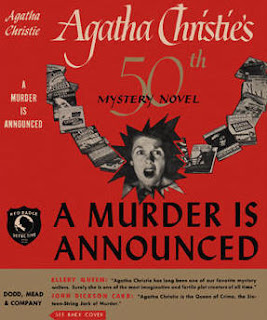 Residents of Little Paddocks:
Neighbors and friends:
The Goedlers:

Synopsis: It is post-war England and things are still a bit austere. One parlor game amusement which is popular is the "Murder Game", in which one person is selected as "murderer" and that person chooses a "victim", and the remaining guests have to be the "detectives".

One day a classified ad appears in which "A murder is announced", giving time (6:30 PM) and place (Little Paddocks). The catch is that the owner of Little Paddocks, Miss Letitia Blacklock, knows nothing about it - but assumes a friend set it up; so she goes along in good fun and gets refreshments prepared.

Her friends arrive for the party. At 6:30 PM a man appears in the doorway. The lights go out. Then he fires two shots at Miss Blacklock - slightly wounding her. Then a third shot,  and he himself falls dead. When the lights are restored, he is found to be a stranger. Who is he? Was his death accidental or murder? And what could the motive be?

The investigation leads back into the past, and conditions of a dead man's will.

Review: This is Christie's 50th mystery novel. The unravelling of the motive follows two parallel paths, due to a condition in a will. The deceased (Randall Goedler) specifies his fortune shall pass to either of two people, depending on who predeceases whom. This pits the two legatees against each other.  It can be a bit confusing, but demonstrates the pitfalls of attempting to predict the future when composing a will. An enjoyable read, with Miss Marple making a bare minimum of appearances; but enough to point the way to the solution.