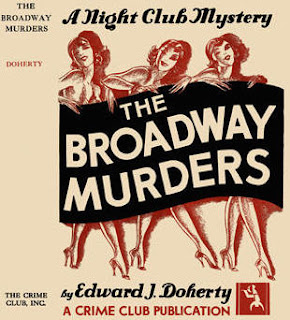 About the author: Edward J. "Eddie" Doherty (1890 – 1975) was an American newspaper reporter, author and Oscar-nominated screenwriter. He is the co-founder of the Madonna House Apostolate, and later ordained a priest in the Melkite Greek Catholic Church (Wikipedia) full article.

Synopsis: The Corsairs Club is Big Joe Carozzo's night club in a penthouse on the roof of the Allegheny Building in Times Square; complete with dancing, gambling, and bootleg liquor (this was, after all, written in prohibition times). Big Joe's lawyer, Anthony Sommers, meets with Spots Larkin in the office, arranging purchase of a large diamond. Then Larkin is found dead, the diamond missing, and Sommers passed out drunk outside the door. Sommers is arrested and goes to trial.

Sommers puts on his own defense, but is convicted and sent to prison. His daughter Molly Sommers heads to New York to infiltrate the Corsairs Club as a singer "Eileen Drew", to learn who the real killer is. She stays in a rooming house along with Monica Lane, a singer, who claims to know who the killer is; but is found dead by poison. Molly reasons that whoever has the diamond must be the killer.

Molly's fiancée Ted Morehouse comes to New York to find Molly. He is shocked to find her with Big Joe Carozzo, who claims they are to be married, and spirits her away his penthouse. Ted goes after her by climbing an unfinished skyscraper and crossing the gap sixty stories over Broadway.

Review: This 1929 novel is straight from the tough-guy world of Guys and Dolls, with hoodlums who carry guns in each hand, cocaine fiends, and gamblers with names like "Mickey Finn" and "Flat Wheel". It is interesting that an author who becomes a priest has such insight into the seamier side of Times Square night life! Anthony Sommer's court defense seems crazy, yet he has a reason, and it is well presented - reminding me of Erle Stanley Gardner's courtroom scenes. Molly's mother presents an actual sermon(!) to Molly - based upon the Book of Judith*, which fits quite nicely into the plot to provide Molly's incentive to become the investigator; at which point she becomes our protagonist.

The climax of the book is Ted's climb up the under-construction skyscraper - in the snow - with the police behind. This turns into a thriller similar to The Saint series. Once past that, the denouément is long and involved, and full of Italian-accent phonetics which get tiring ("He ees theenk Larkin geev heem the doubla-cross"). Overall, a good thriller typical of the period.

*The Book of Judith is one of the apocryphal books of the Bible. It appears in the catholic Bible, but is not included in the protestant Bible. You can read it online here.
Posted by Rick Mills at 8:11 PM