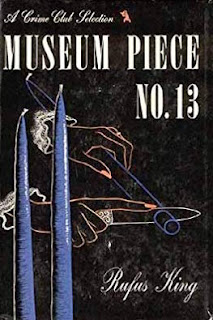 Also published as Secret Beyond the Door

The Blaze Creek household:
Others:

Our protagonist Lily Constable is newly married to Earl Rumney and moving to her new mansion home, Blaze Creek. It is a second marriage for both - Lily's first husband, Wilbur Constable and Earl's first wife, Eleanor Rumney, are both dead. Earl has a teenage son, Aderic, by his first wife.

Blaze Creek is a big mansion with a big staff, 12 women and six men. It is run by housekeeper Mrs. Lovelake, with business affairs handled by secretary Zelma McQuillan; who partially conceals her face with scarves.

Already there is belief that Earl has only married Lily for her money. His newspaper needs a lot of capital, and Lily is quite wealthy. Lily is barely moved in when Earl has her sign a power of attorney (red flag!).

Earl has told her he has a hobby of decorating certain rooms in the mansion. In fact, there are 13. It turns out that each room contains a tableau of a murder (with no bodies, just the rooms staged as they appeared). 12 of the rooms are "public" and he happily shows them to guests. But room 13 is his secret room, and no one, including Lily, is allowed to see inside. Lily is concerned about his mental health, as her psychiatrist friend Dr. Lawrence Russack has warned her to beware if Earl keeps any of the rooms a secret. Russack urges her to get a copy of the key and look inside.

Review: "Last night I dreamt I went to Manderley again." If you can identify that opening line, you will enjoy this book. This story is a parallel to Daphne DuMaurier's 1939 novel Rebecca. The second wife coming to be mistress of a creepy mansion with a cold husband, the ever-present memory of the former mistress, and a creepy housekeeper is right out of that novel; although our protagonist Lily Rumney is quite a bit more assertive than the wife in Rebecca (who even lacks a name).

Then it gets interesting, with the addition of the secret rooms (taken from the French folktale Bluebeard).

There are 13 rooms, but we only get a peek into a couple. The content of the secret room is easy to predict, but still an enjoyable read as Lily seeks to solve the mystery in some daring escapades.

My only criticism is that the author has made quite a word salad in this book, full of long complex words which may send you to the dictionary repeatedly. There were some paragraphs which just defy understanding completely.