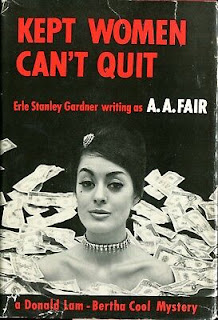 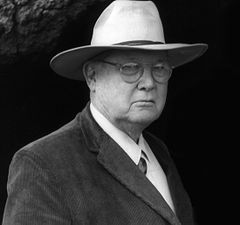 About the author: A. A. Fair is a pseudonym of Erle Stanley Gardner.

Synopsis: Sergeant Frank Sellers is telling investigator/narrator Donald Lam about an unsolved case: An armored car was relieved of $100,000 in $1000 bills while the guards are on coffee break at a drive-in joint. The police have recovered half the cash, but $50,000 is still missing. Herbert Baxley was seen lurking in the vicinity at the time of the theft, and the police suspect him and Hazel Downer (the "kept woman").

Hazel Downer subsequently shows up at the offices of Cool & Lam, asking for help in locating her "husband" (the legality of the marriage seems a bit sketchy), Standley Downer. She claims he has left with $60k of her money, of course in $1000 bills.

Lam goes to San Francisco in search of Downer. He locates an apartment just vacated by Evelyn Ellis, who is Downer's new squeeze. He installs his secretary Elsie Brand in the apartment to observe. He finds Ellis left a locked trunk in the garage. Lam purchases a similar trunk, performs a switch, and winds up with her trunk. He finds $52k in her trunk, which he sends back to his office. Standley is then found - dead - with Lam's trunk all taken apart.

Lam strikes up a friendship with Ernestine Hamilton, roommate of Bernice Glenn, telephone operator at the hotel where everything is happening. Ernestine is a wannabee private eye, so he puts her to work to pump Bernice for hotel dirt.

Review: As in all Cool/Lam stories, this one starts out at full speed and does not let up for a second; which I why I find them easiest to consume in one, maybe two at most, sittings.

By the time of the trunk swap episode, we are already losing track of the various stashes of $1000 bills floating around. Little attention is paid to the murder - everyone is after the money instead.

The episode of Lam enlisting Ernestine Hamilton as an amateur P.I. is different, and enjoyable to see him establish a platonic friendship with a woman.

Gardner's heritage as a pay-by-the-word pulp writer always shows through, with lots of incidental characters and conversations, and of course, characters getting unnecessary middle names, and businesses getting long complex partnership names; in order to get the word count up easily.

One caution: terms used for persons of Japanese ancestry reflect the bias of the times.

Email ThisBlogThis!Share to TwitterShare to FacebookShare to Pinterest
Labels: Fair; A. A., Gardner; Erle Stanley