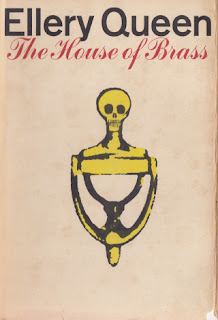 About the author: Likely plotted by Frederic Dannay and Manfred Lee. Different sources identify the author as either Theodore Sturgeon or Avraam Davidson.

Synopsis: Six strangers each receive an invitation in the mail to visit Hendrik Brass in upstate New York. One of the strangers is Jessie Queen, née Sherwood; recently married to retired Inspector Queen (father of Ellery). Each invitation includes $100 in travel expense money, and half of a $1000 bill, to which they will receive the other half if they accept.

They arrive to find a large, decrepit mansion inhabited only by blind, elderly Hendrik and his assistant Hugo. 'Brass' is not only his name, but his business - he has built a fortune making brass appointments in the attached workshop. He reveals the six were chosen because the parents of each did a service to him years ago, and now he is choosing whom to include in his $6M will. His attorney/private eye Palmer Vaughn also sought three additional persons, but found two had died, and one - Harding Boyle - could not be found.

Brass' reason for choosing them is found to be false. Queen recruits his old cronies to chase down the past of each. Brass meets his expected end, and the six legatees are in line for $1M each - but where is it?

Review: This is the sequel to Inspector Queen's Own Case, and begins like a classic captive-audience mystery, with an odd assortment of people with no apparent connection summoned to a creepy country house. Unlike the usual mysteries of this type, the guests are free to come and go as they please.

When old Brass announces his intention of leaving each of the six guests $1M each in his will, you know he is not long for this earth. The focus of the book is not so much finding his murderer, as it is finding the lost $6M treasure.

Plenty of surprises at the end (which reminded me of the end of Daphne Du Maurier's Rebecca).